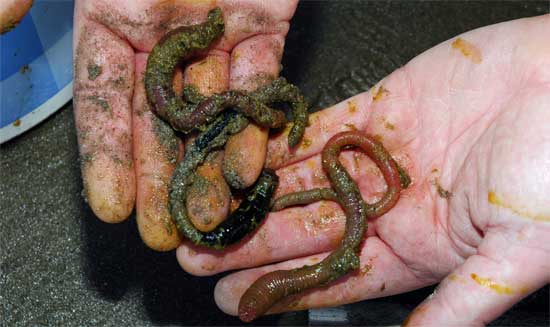 When fully grown, the lugworm of the coasts of Europe is up to 9 inches long and 3/8ths inch in diameter. The body is like that of an earthworm: ringed or segmented. Its head end, which is blackish-red and bears no tentacles or bristles, passes into a fatter middle part which is red. This in turn passes into a thinner yellowish-red tail end. The middle part has bristles along its sides and also pairs of feathery gills. There is a well developed system of blood vessels with red blood rich in the oxygen-carrying pigment, haemoglobin.

A lugworm lives in a U-shaped burrow in sand. The U is made of an L-shaped gallery lined with mucus, from the toe of which a vertical unlined shaft runs up to the surface. This is a head shaft. At the surface the head shaft is marked by a small saucer-shaped depression.The tail shaft, 2-3 inches from it, is marked by a highly coiled cast of sand. The lugworm lies in this burrow with its head at the base of the head shaft, swallowing sand from time to time. This makes the column of sand drop slightly, so there is a periodic sinking of the sand in the saucer-shaped depression. When it first digs its burrow the lugworm softens the sand in its head up into the head shaft by pushing its head up into it with a piston action. After that it is kept loose by a current of water driven through the burrow from the hind end, by the waves of contraction passing along its body. It weighs 2-5 oz. Lugworms also have groups of hair on the outside of their bodies that act as external gills. This can rapidly increase its uptake of oxygen.

Once it burrows into the sand a lugworm seldom leaves it. It can stay there for weeks on end, sometimes changing its position slightly in the sand. But it may leave the burrow completely and re-enter the sand, making a fresh burrow for breeding but for 2 days in early October there is a genital crisis. This is when all the lugworms liberate their ova and sperms into the water above, and there the ova are fertilized. The ova are enclosed in tongue-shaped masses of jelly about 8 inches long, 3 inches wide and 1 inch thick. Each mass is anchored at one end. The larvae hatching from the eggs feed on the jelly and eventually break out when they have grown to a dozen segments and are beginning to look like their parents. They burrow into the sand, usually higher up the beach than the adults, and gradually move down the beach as they get older.

Cartoonist Piers Baker created a syndicated comic strip called Ollie And Quentin, with a buddy storyline about Ollie, a seagull and Quentin, a lugworm. The strip originated in the UK in 2002 and went into international syndication in early 2008. Baker considers the strip "...an homage to all the poor lugworms that he used as bait while sea fishing in his youth."
(Wikipedia)