The population of Greylag geese has increased very dramatically on the Scottish west coast islands in the recent past - and Islay is no exception.  The hunting season is September 1st to January 31st in Scotland - with an extension to February 20th when shooting 'below the high water mark'.
Greylags are shot by the keepers on the estates and by farmers protecting their crops.  Small numbers of Barnacle geese are also shot as part of the Goose Management Scheme on Islay - but they are not allowed to be sold. 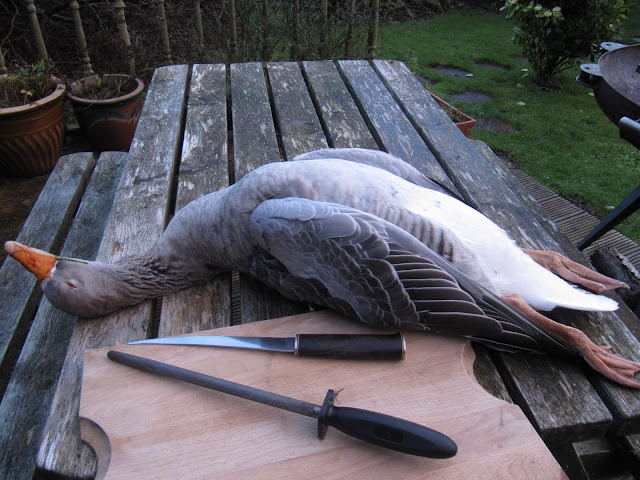 This Greylag was on my doorstep when I returned home yesterday.  I took the breasts off, each of which weighed over a pound, and they are in the freezer.  We will probably cut them into very thin strips and flash fry them after marinading in Hoi Sin sauce with some garlic.  Served with boiled rice and stir-fried vegetables they will be absolutely delicious...
Carl
Posted by Islay Natural History Trust at 12:37