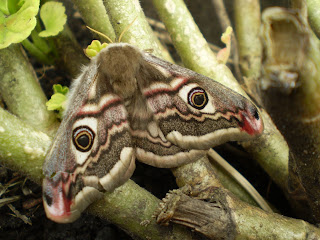 If only we'd had the blog for 2009's season at the Centre. In April an excited Morag McTaggart from Port Charlotte came in with this beautiful specimen of Emperor Moth that she came across on the wee bridge in the village. We put him in the flower tub outside and he eventually flew off (hope, in fact, that this is a 'he'!) I was thrilled as I've never seen one before - only the lovely green caterpillars. I met Morag again today and she reminded me of this event as she'd been as excited as I was. Thanks Morag!