I found this Pale Brindled Beauty in the public toilets at Bridgend on Tuesday (15th), appropriately in the gentlemen's side of the facility as this is the male of the species. This slightly blurred photograph was taken on my iPhone. As someone has since commented, taking photographs in public toilets is something to be rather cautious about and I decided not to go back in with my camera! The female moth is distinctively different, but I had to reply "no, I didn't" when asked if I had checked for one in the ladies' side!
There are no previous records for Islay for this species, which flies between January and March, though there were three records on Jura back in 1980, which have to be regarded with suspicion as they were all in early September with no mention that they were pupae, which is the stage the moth would be in at that time of year. So this may well be the first record for the vice-county, i.e. Islay, Jura and Colonsay.
Malcolm 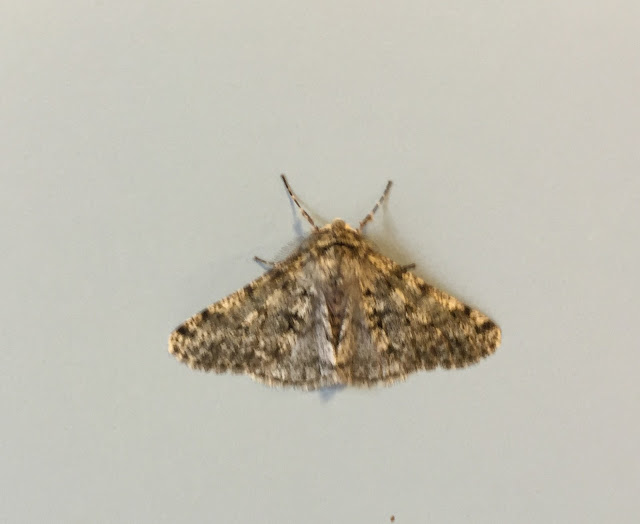 On the back of our next talk the irony of the world exporting its wildlife to this remote island ecosystem.  New Zealamd wildlife is giving payback - the New Zealand flatworm.

The irony is that for all the introduced species sent in their direction has a problematic species export of its own now increasing its distribution here.  Visit the Islay Natural History Trusts Facebook page if you have the New Zealand Flatworm in your garden and let us know where you have seen it in our quick poll into its current distribution on .  It may have been present quite a few years now but I have only recently met one on these unpleasant creatures. Why are they important? well they like to eat our native Earthworms that do an important job of mixing up and aerating the soil, and provide food for a whole host of bird species.
Fiona MacG
Posted by Islay Natural History Trust at 09:39 No comments: 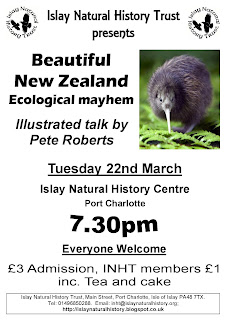 It seems to have been a popular destination for folk this past winter, but not all the visitors to this ancient country returned home or left without making a significant impact on the islands inhabitants.  Pete Roberts gives us some insight into the impacts of introduced species on an isolated island population, the next talk at the Islay Natural History Trust (see advert in this issue). 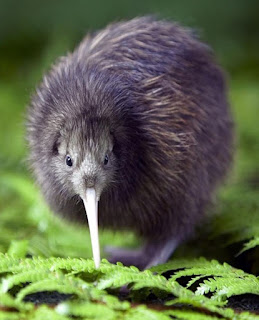 separated 70 million years ago from the other ancient landmasses of Gondwanaland. It had no land mammals and the fauna evolved in almost total predator-free isolation. A wonderful range of flightless birds evolved, including the famous kiwis and the giant ostrich-like moas. Then, very recently, humans arrived and inevitably began causing rapid mayhem! Our hunting, introduced animals and ensuing habitat losses have driven much of ’s unique birdlife to extinction. 58 species of birds – over a quarter of all the unique species originally found there have been lost in just 800 years. Now an estimated 10% of the world’s endangered birds are found here.


But is indeed a beautiful country when viewed from other perspectives with quaint towns, productive green farmland, and stunningly dramatic landscapes.  Happily the tide of extinctions and losses is turning and has perhaps the most pro-active and drastic government conservation policies of anywhere in the World. This has saved at least some of its very special wildlife from the brink and, in some ways, made it surprisingly easy for birdwatchers to see what remains.


Come along and discover the impacts that new species can have when they don't complement the native wildlife.
Posted by Islay Natural History Trust at 09:34 No comments: