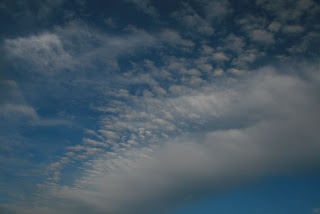 I know you're all missing my cloud musings! So here's one I took earlier today. After the morning had been virtually cloudless, these beauties floated serenely across my view. Their name? Wait for it - altocumulus stratiformis perlucidus - apparently an indicator of light rain to come. The expert Gavin Pretor-Pinney thinks such skies will soon be known as a 'carp sky' because of its (apparent) resemblance to the Common Carp - it's a lot easier to say than their formal name anyway!

Becky
Posted by Islay Natural History Trust at 18:02 No comments:

Three otters at the Shorefield 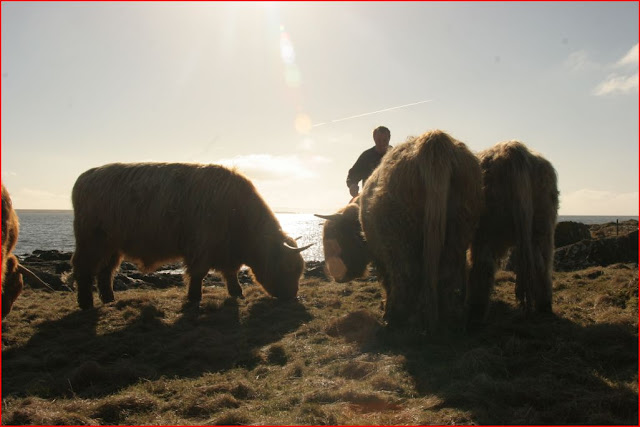 Alan and Linda, whose house overlooks the Shorefield, told us they were watching three, maybe four, otters this morning for around 15 minutes.  Just before we arrived to feed the beasts...
Carl
Posted by Islay Natural History Trust at 14:38 No comments:

Posted by Islay Natural History Trust at 09:38 No comments: 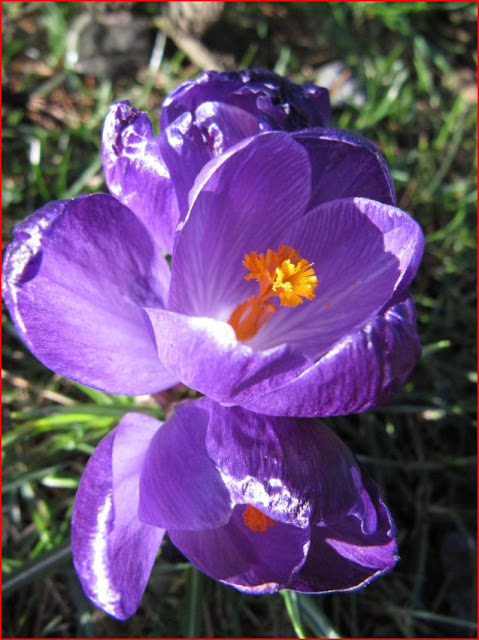 Why are crocuses (should that be croci?) always scruffy?  They are a flower with such elegant potential, but they always contrive to look as if they have been dragged through a hedge backwards.  We need to know...
Posted by Islay Natural History Trust at 09:19 No comments:

Many Thanks to Martin Armstrong for this photo of a recently deceased Snake Pipefish he found at Machir Bay.

The Snake Pipefish or Entelurus aequoreus used to be a relatively uncommon fish until about five years ago. Certainly they were never recorded in the north but one year a few appeared and then their population suddenly exploded. I have seen over a hundred on one dive and crab fishermen, who have never before come across one, now find their ropes and creels covered in them. They are common in rock pools and are often seen offshore up on the surface where sea birds catch them for food. However, due to having a somewhat crunchy external skeleton, they usually get regurgitated. Some species of birds, particularly Auks and Terns, have resorted to trying to feed Snake Pipefish to their chicks as a substitute for their more normal diet of Sand-eels, which are in serious decline due to over-fishing and climate change. However, this has proved disastrous as the Pipefish have limited nutritional value compared to the oily flesh of Sand-eels and their hard, long bodies have caused many chicks to choke.

Nobody has been able to explain why this sudden population increase has come about but it is possible they may vanish as quickly as they arrived.

Found on a walk this afternoon, both showing the effect of Islay's climate: the Hawthorn with its abundance of lichens (most if not all Ramalina farinacea) growing in our moist but very pure air (lichens don't grow well in polluted air), and a Birch shaped by the wind.
Malcolm 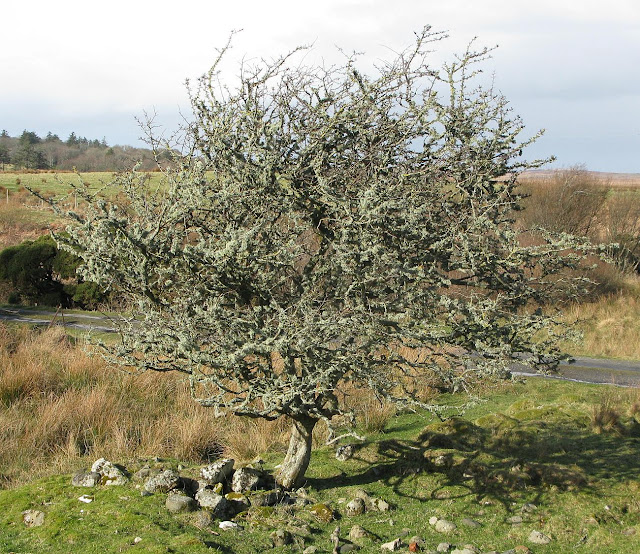 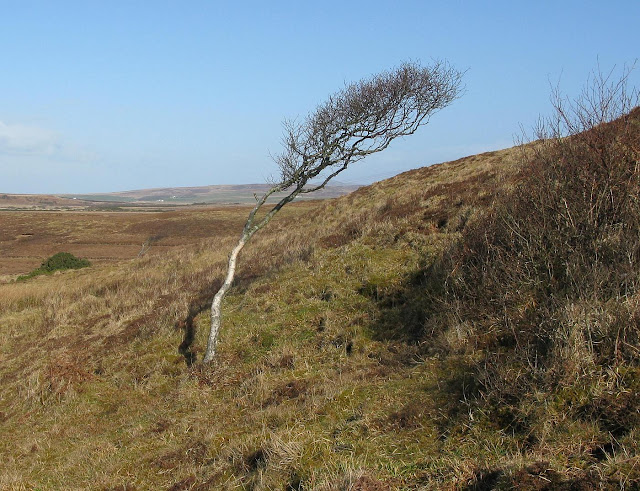 Posted by Islay Natural History Trust at 14:01 No comments: 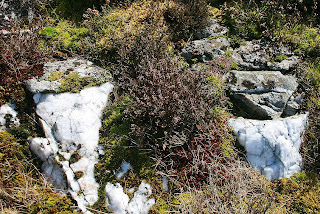 This lovely example of quartzite was just one of many on An Curran. I've waited so long to ascend this diminutive hill that I took a photo of everything I could think of to make up for all the waiting!

Becky
Posted by Islay Natural History Trust at 17:48 No comments: 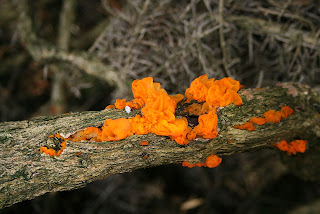 Becky
Posted by Islay Natural History Trust at 17:47 No comments:

This species has been getting more and more visible in the last few weeks as pairs start breaking off from the flocks and looking for places to breed this spring. The offshore islands (Texa, Nave, etc.) hold several pairs each, as do some of the lochs, e.g., especially, Gorm. These birds are resident in western Scotland but the fluctuation in numbers on Islay suggests there is some movement going on - to other islands or to the Argyll mainland.
Malcolm 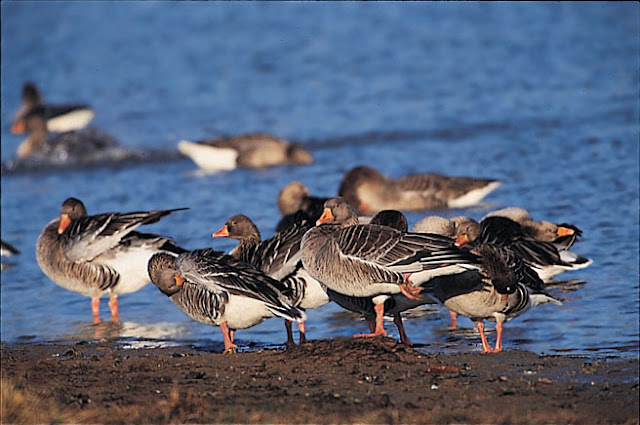 Posted by Islay Natural History Trust at 15:47 No comments: 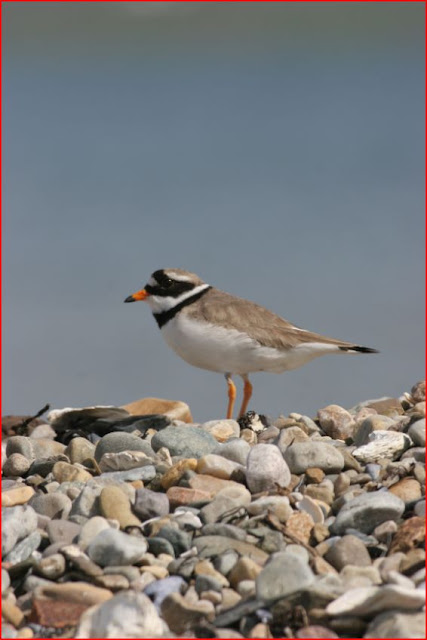 Posted by Islay Natural History Trust at 08:58 No comments:

Posted by Islay Natural History Trust at 08:55 No comments: 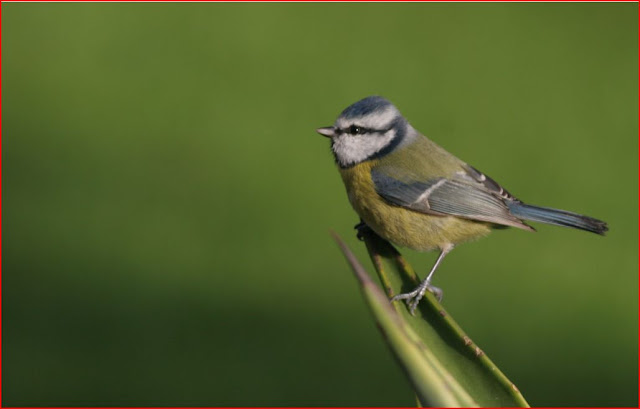 Posted by Islay Natural History Trust at 08:39 No comments: 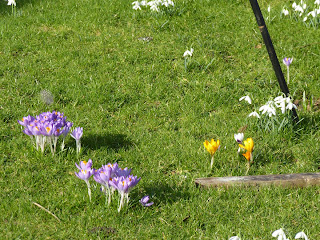 What a gorgeous day it has been today after a dull start! I feel positively bouncey! To add to my joy whilst goose counting today, Kevin and I came across this gorgeous bunch of crocii and snowdrops - now, you can't tell me spring's not just around the corner!
Becky
Posted by Islay Natural History Trust at 16:34 No comments: 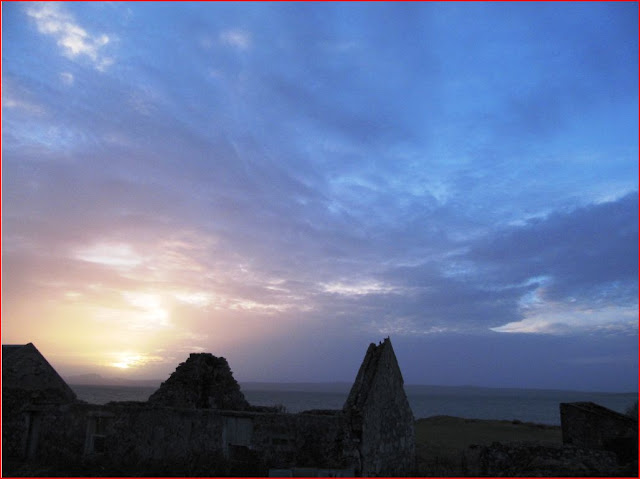 There are far fewer ruined buildings on Islay today than there were fifteen years ago.  The majority have now been renovated and are full of happy holidaymakers for at least part of the year.  The old blacksmiths workshop near Springbank is an exception however.  It is still rather forlornly waiting for somebody to evict the Jackdaws.
At the risk of sounding like an old codger, I remember when at least part of the building was a working smiddy, run by an elderly gentleman called John.  It was a remarkable throwback of a place, with a dark, slightly forbidding interior, piled high with generations of iron and steel.  John was very good to us.  He made the grate for the strange-shaped fire in the Port Charlotte Hotel, and also built us a spit on which we impaled a pig - roasting it whole over half an oil drum full of charcoal.  That pig fed around 250 folk the day the hotel opened.  I think I have a photo somewhere, but those days things were strictly analogue, and being an old codger I can't remember where anything is...
Carl
Posted by Islay Natural History Trust at 09:07 No comments: 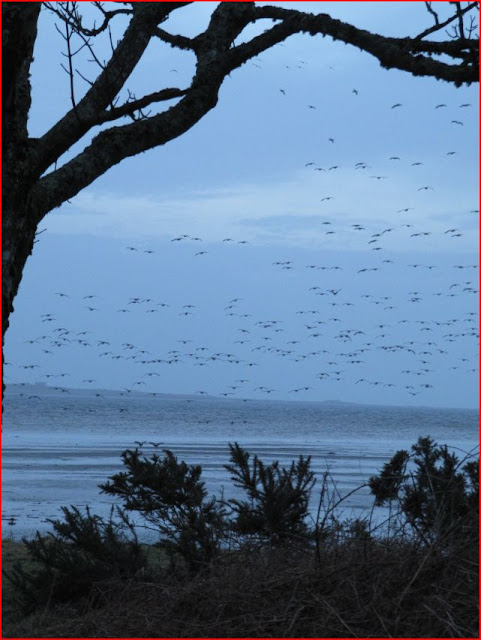 The sky was full of Barnacle geese coming in to roost on a falling tide at the head of Loch Indaal as I was pedalling home last night.  The light was rather flat, but it is always a spectacular sight and sound.
Posted by Islay Natural History Trust at 08:46 No comments: 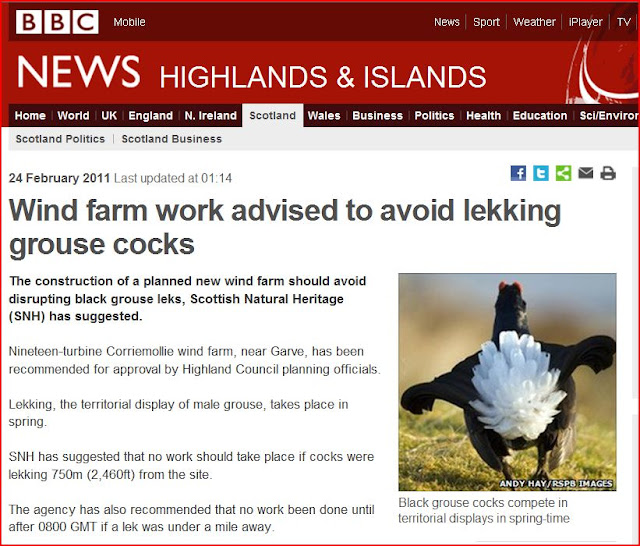 An order has been backed to destroy an "invasive" species of deer if any escape into the wild.
The Scottish Government wants to keep Muntjac deer out of the country after warnings from England about the damage they can cause to trees and crops.
Environment Secretary Richard Lochhead said there is no known established population in the wild in Scotland, adding: "We would like to maintain that situation."
The order was discussed with MSPs on Holyrood's Rural Affairs Committee.
The regulation requires Muntjac to be kept only under licence and adds: "By reason of their destructive habits it is desirable to control the keeping of them and to destroy any such which may be at large."
Mr Lochhead said: "Muntjac deer are originally from Asia and are already an invasive non-native species in England and Wales.
"They're widespread in south and central England but have a patchy distribution between the Humber and the Scottish borders. They are destructive animals, or invasive species to use the more modern term. They can have significant negative impacts in the wild, both to biodiversity and economic interest."
They can damage orchards, cereal crops, coppice woods and bluebells, he said, and have been known to add to accident risks on roads.
The committee was told some of the species are kept securely in deer parks in Fife.
MSPs unanimously backed the provisions of the Muntjac Keeping (Scotland) Order 2011.

Copyright © 2011 The Press Association.
Posted by Islay Natural History Trust at 08:28 No comments: 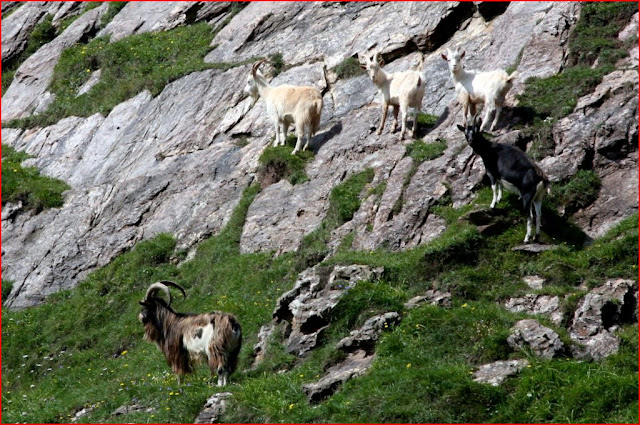 Thanks to George for this shot of wild goats on the Oa.
Posted by Islay Natural History Trust at 08:16 No comments:

Any ideas what this is? Slime mould? 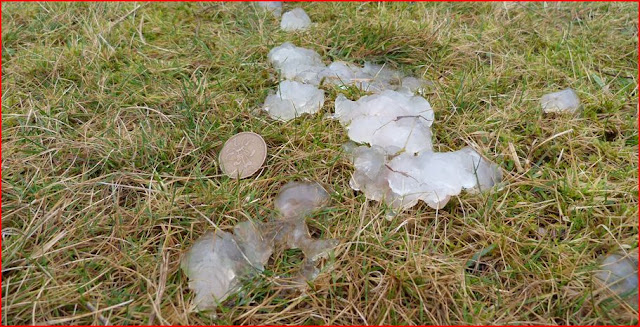 Martin found this goo near the burn behind Port Charlotte.  The consensus is that is a sort of Slime Mould.  Do we have any Slime Mould experts out there?
Posted by Islay Natural History Trust at 19:13 4 comments:

"You must be joking!"

This was what my dog said to me today when I asked him to search the seaweed along the Uiskentuie Strand for any dead birds. This weekend is the national Beached Bird Survey run by the RSPB and I usually cover the two miles of the Strand. Merlin has proved adept this winter at finding dead things - several Guillemots, two Great Northern Divers, a Lesser Spotted Dogfish and a cat being among his finds. However, he was not amused at my command (more like a request, really) to search the substantial piles of seaweed that have been washed up by the spit in the last week or so.
Malcolm 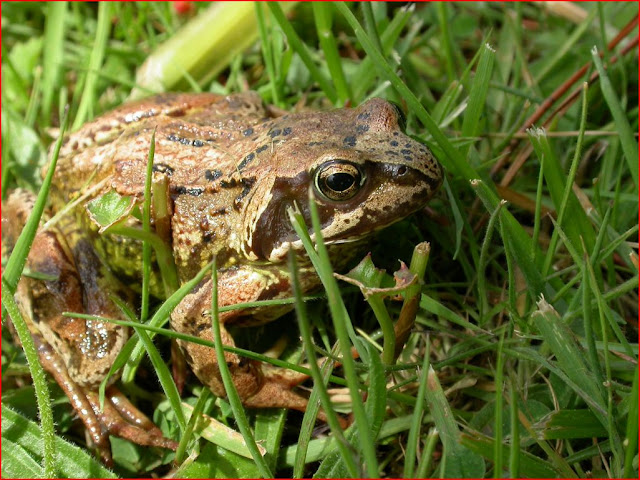 Like Ian and Margaret, I saw my first amphibians of the year on the road while driving back from Port Ellen last night.  Could not swear as to whether they were frogs or toads - and please forgive me for not getting out to check as it was absolutely pouring with rain...!!
Carl
Posted by Islay Natural History Trust at 08:34 1 comment: 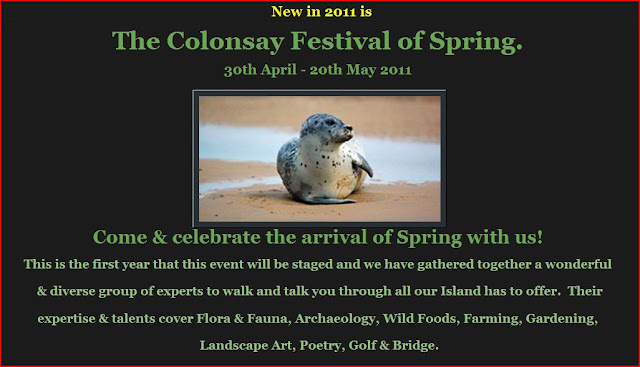 http://www.colonsayevents.co.uk/Colonsay-Events-Home
Posted by Islay Natural History Trust at 08:22 No comments: 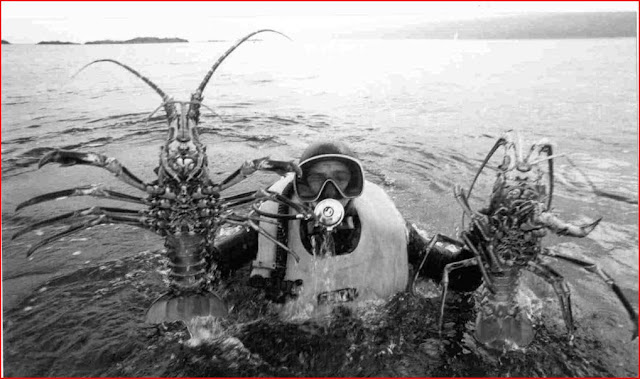 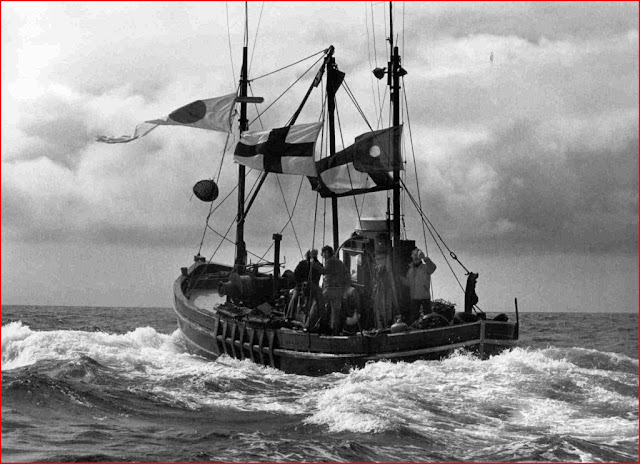 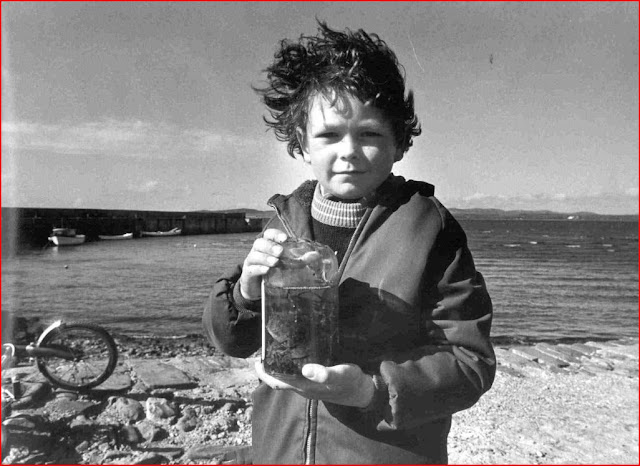 This is part of a collection of photographs donated to the Museum of Islay Life by Bowmore Distillery in 1998.  We do not have a record of the photographer's name, which is a great shame as whoever he (she?) was these are quality images taken by a skilled hand.  Can anybody help?  Does anyone recognise any of the folk in the pictures?
The fishing boats will have been engaged in the annual Fishing Boat Race in Port Ellen.  The Crawfish are very impressive specimens, and the boy with the jar of tiddlers is on the shore in Bowmore harbour.
Carl
Posted by Islay Natural History Trust at 09:18 6 comments: 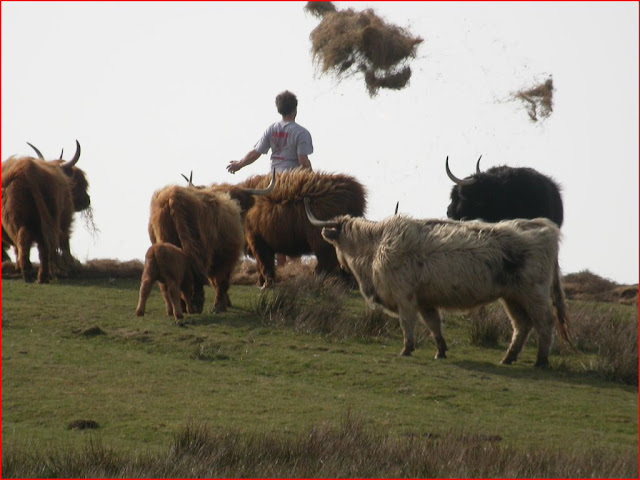 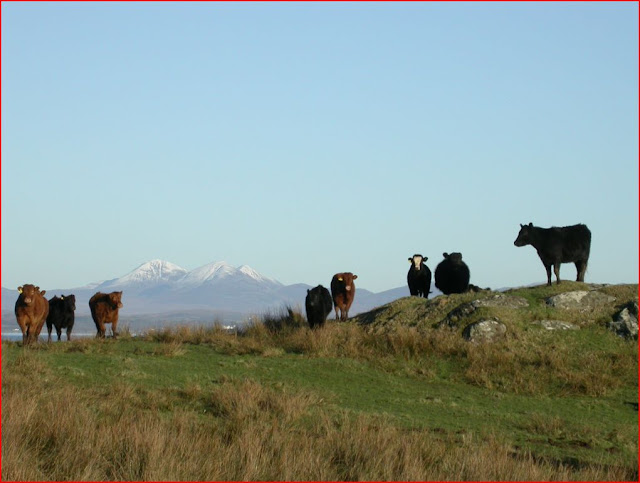 Another grey misearable and wet day.  A couple of cow pictures from the archives...  The top one was taken up at Sanaig, the second behind Carn.
Carl
Posted by Islay Natural History Trust at 08:42 No comments:

Hello all. Walked the northern half of the Big Strand today as part of a beached birds survey. Didn't see many beached birds, but did see the following...

and this big chap pictured below, dead on the beach. We had a few smaller Spider Crabs in the Natural History Centre last year, but couldn't keep anything this size, it was pretty huge 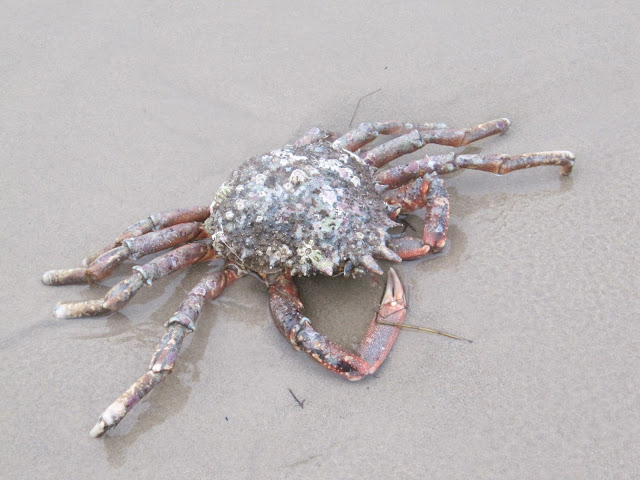 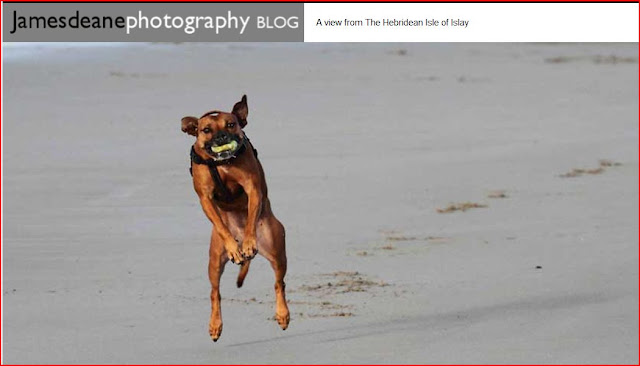 James Deane Photography Blog
﻿
Best of luck with this James!
Posted by Islay Natural History Trust at 10:55 No comments: 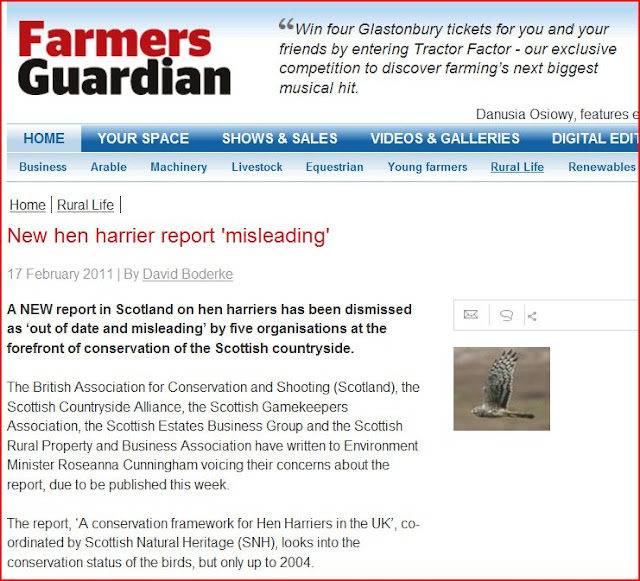 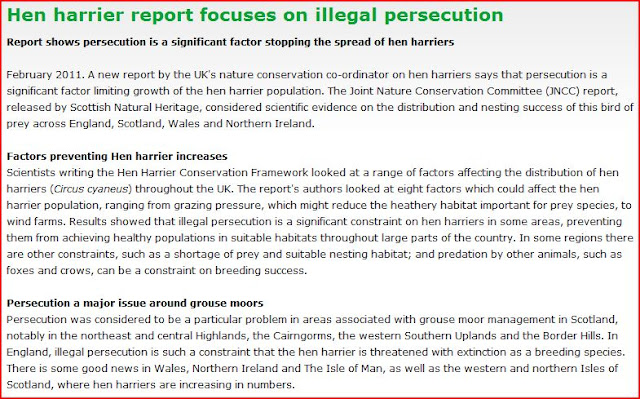 Three more Bullocks in the Shorefield