Several years ago, Donald Fletcher planted a hedge either side of the lane which runs from the main road just north of Keills past his farm at Persabus and on to Bunnahabhainn. The hedge has done well, protected as it is from grazing animals, and this year the Sea Buckthorn (Hippophae rhamnoides) in the hedge has flowered and produced berries. Sea Buckthorn, normally a coastal plant, is dioecious, i.e. there are separate male and female plants, and you need some of each if you want to see the striking orange berries which the female bushes produce. For some reason, the berries don't seem very attractive to birds - perhaps they are very bitter, or perhaps they need a good frost to soften them. Despite the very large numbers of Redwings that have been on Islay this autumn, there are plenty of berries still present. Maybe they will be taken if this cold weather continues.
There are two old records (1950s) of Sea Buckthorn growing on Islay - both introduced because it is not a native species this far north in Britain. One is "beside a coastal burn at Killinallan" and the other "growing in a hedge at Bridgend". I am not aware of any recent records from either locality, or indeed elsewhere on the island. If anyone sees this plant anywhere on the island, please let us know by clicking on the "Species Record Forms" link at the top of this page and completing a Casual Records Form.
Malcolm 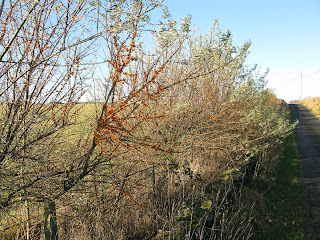