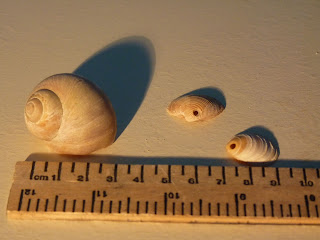 Walking along Kilnaughton Bay yesterday I came across a lot of small Venus shells with holes in them as shown above. I also came across a couple of Necklace Shells (Polinices catenus) and thus the murder mystery was solved!

............. I discovered its true identity and the reason for its name. It is the Bonxie of the shell world. A hunting carnivore, it feeds on small sand-dwelling bivalves (shells made up of two halves) which it opens by drilling distinctive round holes through the shells. Still, let's not be too hard on them; after all, they do make it easier for us crafts people to make necklaces!