One of the weird things about living on Islay, which applies to much of the west coast of Scotland, is how big a contrast there is with much of the rest of western Europe - because there are so few people living here.  The really weird thing is that it was not always thus.  While the vast majority of Europe, indeed the rest of the world, has seen dramatic rises in the human population over the past 150 years - the west coast of Scotland and the Hebrides have seen the opposite - a dramatic decline.

But run a keen eye over the Islay landscape and you will soon find signs of populous times past.  Earlier today I found myself on top of Storakaig, the hillfarm that sits atop of the rise south of Knocklearach on the Mulindry road between Bridgend and Ballygrant.  The light was grey and the gentle, cutting breeze carried some sleet.  A curlew had flown from a boggy patch and I stopped to check to see if there were any deer. 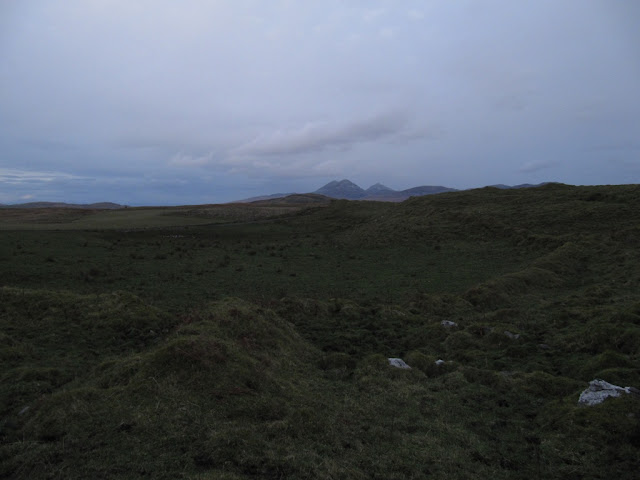 I took the shot above because it tells a rather sad little story of those forgotten folk, people who must have struggled, not to make a living, but simply to survive in this forlorn place.  You can just see the turf covered wall, which must have been built at some considerable cost, running up the right hand side of the picture - it actually forks towards the top of the run - but I could not get the right hand fork into the shot.  The wall would have been an attempt to protect the 'in-bye' land, (which would have been used for crops such as hay and oats and potatoes) from the 'out-bye', which was used for grazing - the wall being to keep the beasts out at the key times of year.
To the left of the wall is the flattened ground, once doubtless cultivated, but now abandoned, even by modern machinery.  You can just make out the clumps of  juncus (rushes) that are the sure sign of abandoned land on Islay - or land where the maintenance of the field drains has broken down creating bogs.

In the distance to the far left you can see the maintained modern fields, which is all the land that modern farming considers it worthwhile maintaining.  Where there would have been dozens working to eke a living from this bleak place now all it will receive is the odd visit from a man driving a monster tractor.

The descendants of the folk who built that wall will now be in Glasgow, or Newfoundland, or Australia.  They are unlikely to be living in Ballygrant.
Carl
Posted by Islay Natural History Trust at 22:37