We have another big depression moving through at the moment with winds currently around 33mph but forecast to rise to a peak of around 48mph by 09.00hrs tomorrow morning.   Ferries were cancelled this afternoon and there would appear to be little chance of ferries tomorrow morning either.

We have added an atlantic weather chart from Meteorologica to the bottom of the blog which is updated every 60 minutes or so which will give an overview of the weather systems heading our way.  Just click on the map to go to the Meteorologica home page.

I heard from Ian who had heard from Bob who had heard from John that there was a Grey Phalarope seen at Carnain, the infamous 'Smelly Corner' two days ago.  I stopped by on the bike yesterday and saw it quite briefly and well before it flew off.  A very very attractive bird, swimming daintily and picking impossibly minute titbits from the surface of the water before taking off and heading to the other side of the lagoon.  But what a flight - a wonderful butterfly-like aerial mince across the surface, long winged and impossibly elegant.

It was back again today - in exactly the same place, this time staying put for as long as I wanted, pirouetting, spinning on its axis as if it was clockwork driven rather than an animate being.  You would think it would get dizzy.

It will not be wanting to move far in these winds - so it will definitely be worth a look when things calm down - which is not forecast until Thursday afternoon. 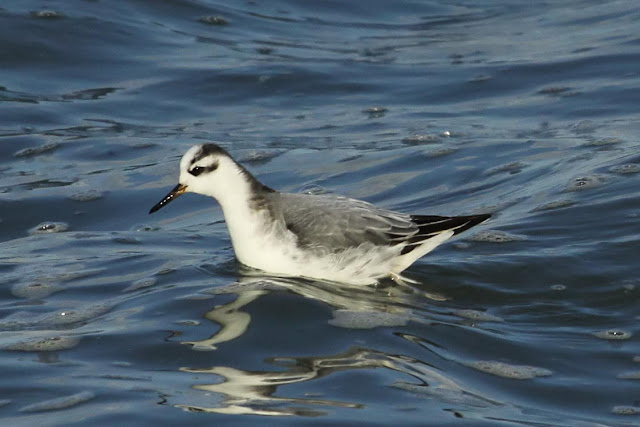