Nice weather for a change. 12 folk met at the Co and on the way across the bay and out onto the Ard learnt about 600 million-year and 60 million-year old oceans, collisions and break-ups of ancient continents. plus a bit of metamorphism.

The ridges of the Ard are composed of harder meta-basite rocks and the interveening linear boggy bits are underlain softer meta-sediments. Good hiding places for illict whisky stills in days gone-bye. We finished off with the obligatory bit of audience-participation as we created a human timeline from the big-bang to the stone age.

Posted by Islay Natural History Trust at 15:05 No comments:

This week our Family Activity is the final of the season, and will be held in Bridgend Woods, for a fun afternoon discovering trees, leaves and hidden minibeasts. The event is free to all, no need to sign up, just come along with good footwear and dressed for the weather.

Our Sunday rAmble this week is not the last of the season though, these continue until the end of September for anyone interested in birds, fungi and sea life. This Sunday, we're in Port Ellen, for a geological exploration of underwater volcanoes and whisky on the rocks. Charge is £5 per adult, or £10 per family. If you're already a member of the INHT, the charge is £2. See you there!
Posted by Islay Natural History Trust at 10:41 No comments:

We had a lovely day rockpooling at Port Mor on Friday for our seashore safari event and were very glad to see so many people come out to explore and learn more about our native wildlife. This was certainly helped by the beautiful weather we had (all except for one slightly torrential rain shower) which always makes a day on the beach more enjoyable.

Among the creatures found were shrimp, dog whelks, winkles, hermit crabs, sea anemones, shore crabs, a ten-spined stickleback, and some sea squirts (which lived up to their name quite humorously).


Looking forward to the Magic Moorland activity at RSPB Loch Gruinart this Thursday 17th August. Join us at the hide car park at 2pm to discover beauty in miniature - sphagnums and midge-eating flowers!

This Sunday we are at the Kilchoman Gala Day - come and pay us a visit! Due to this there will be no walk this Sunday.
Next week, the 27th, we will be discovering geology at Port Ellen. Come for a tale of two oceans, underwater volcanoes and whisky on the rocks.
Don't forget our Thursday activity at 2pm, this week at the RSPB Loch Gruinart car park for Magical Moorland to discover beauty in miniature - sphagnums and midge-eating flowers!

Posted by Islay Natural History Trust at 12:23 No comments:

We had a really successful day at the show yesterday; the weather was good, the show was busy and our games and activities went down a storm. We had everyone from families, small children, 20-something year olds up to the older generation all joining in our "Great Bird Race" game - an old classic designed to get your competitive spirit going!


Our other game, fishing for a prize, proved popular with our younger visitors. Fish using an animal of your choice, and catch two or three fish with matching numbers to win a prize! Harder than it looks...

Plenty of people came to "buy a plot." Choose a square on the Islay map where you think the Highland Coo is hiding, and be in with a chance of winning a bottle of Bruichladdich Whisky and the Highland Coo! Some people decided to max out their chances and buy a whole corner of the island...!

You could also challenge yourself and build a wall, using diagrams, numbers and shapes. I had a go, it wasn't as difficult as it looked at first...! 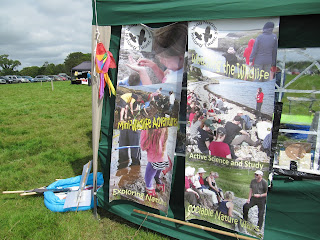 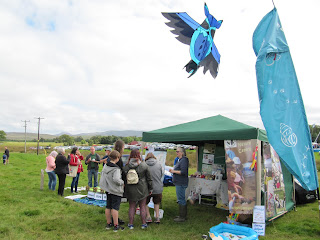 In all, a successful day, raising awareness of our rAmbles and kids' activities, the centre and all the work it does. And of course, raising lots of funds! Many thanks to everyone who came to see us, and especially to those who played our games and bought a plot - it was great to see so many friendly, enthusiastic faces.

In keeping with the wonderful array of orchids on the dunes at Killinallan, as celebrated with our Sunday Nature rAmbles, we have a new display illustrating the variety of orchids of Islay. Complete with detailed information cards, and high definition, beautiful photographs, your curiosity will surely be met. 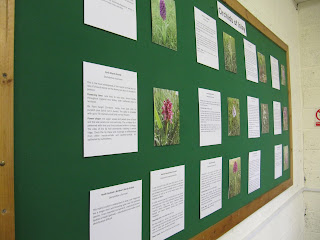 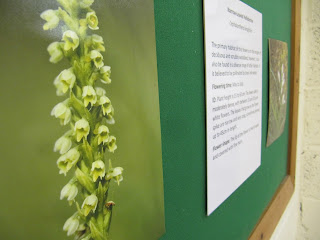 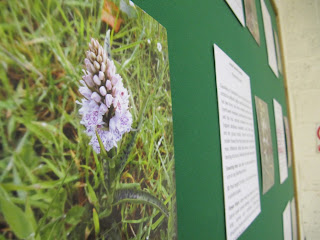 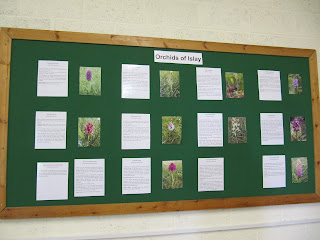 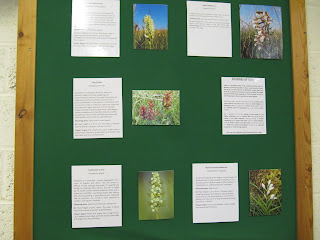 Posted by Islay Natural History Trust at 14:24 No comments: 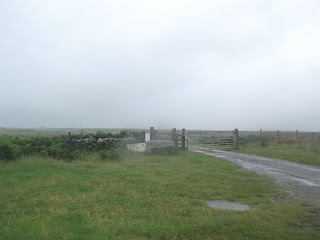 My anticipated final opportunity of the season to show people the amazing floral display at Killinallan was looking like being thwarted by RAIN! again, another damp Sunday.


Across the saltmarsh were a few new species in flower since last visit, Sea Spurrey which had been flowering on Thursday was now thin on the ground though I did find one in flower.  The full moon has brought on some high tides which I expect has knocked the flowers back.  There was a nice amount of Glasswort, once you got your eye in and still flowering were the Sea Arrow-grass which tastes of coriander and not to be confused with the sea plantain which has some equally non-descript flowers. 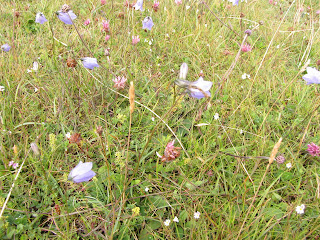 In the dunes the carpet of colour was interspersed since July's visit with a peppering of blue and purple flowers which weren't out a month ago; Harebell, Devil's bit Scabious and Autumn Gentian.

Many of the orchids were now passed however there were plenty of Frog orchid still well in flower and through the wetter dune slack area we still saw a range of quality blooms of the Common Twayblade and after a bit of searching we did find some remaining flowers of the Marsh Helleborine although these were definitely past their splendour of early July.


It was a windy day so capturing the flowers in mid sway was a little tricky and insects were few, but enjoy the display and if you have some spare time for a walk get along to the dunes in the next week or so, to soak up the splendour of flowers in the back end of the season.

More flowers and sights to be had next Sunday at The Battery Bowmore 2pm.
Fiona MacG
Posted by Islay Natural History Trust at 16:05 No comments:

This week Alistair, our resident fungi enthusiast, provided some of his recent records complete with photographs. Back in July, he sighted the Destroying Angel (Amanita virosa) at the Kilmeny Plantation, and this is the first record on Islay. He also sighted the Aniseed Cockleshell (Lentinellus cochleatus), which is the first sighting since 1993 on Islay, at Loch Ballygrant south.

While on his travels he also sighted the Beautiful Carpet moth, Mesoleuca albicillata, which is only the second recorded sighting of the moth on Islay - Malcolm caught one in his moth trap in July 2011. There have also been three records on Colonsay. Although not uncommon in southern Britain, it is scarce in Scotland.

Posted by Islay Natural History Trust at 11:12 No comments: