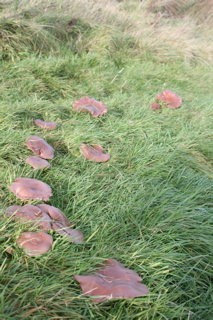 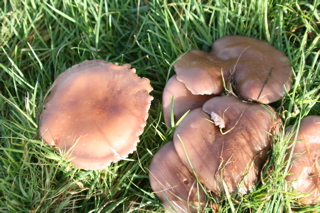 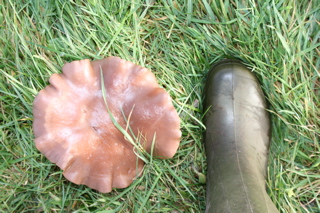 Thanks to George for sending in these shots of a group of mushrooms growing in a 'fairy ring' at the back of his house.  I suspect they may be 'Lepista personata' the field blewit.
A fairy ring, also known as fairy circle, elf circle, elf ring
or pixie ring, is a naturally occurring ring or arc of mushrooms. The rings may grow to over 10 metres (33 ft) in diameter, and they become stable over time as the fungus grows and seeks food underground. They are found mainly in forested areas, but also appear in grasslands or rangelands. Fairy rings are detectable by sporocarps in rings or arcs, as well as by a necrotic zone (dead grass), or a ring of dark green grass. If these manifestations are visible a fairy fungus mycelium is likely present in the ring or arc underneath.
Fairy rings also occupy a prominent place in European folklore as the location of gateways into elfin kingdoms, or places where elves gather and dance. According to the folklore, a fairy ring appears when a fairy, pixie, or elf appears. It will disappear without trace in less than five days, but if an observer waits for the elf to return to the ring, they may be able to capture it 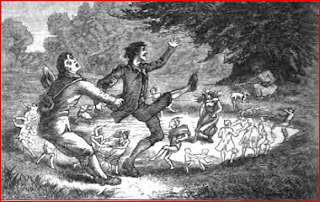 There are two theories regarding the process involved in creating fairy rings. One states that the fairy ring is begun by a spore from the sporocarpus. The underground presence of the fungus can also cause withering or varying colour or growth of the grass above. Mushrooms, the fruiting bodies of fungi that poke their heads up out of the soil after rainstorms, tell only part of the fungi's story. Hidden in the soil is a huge network of threadlike mycelia. Mushrooms are not individual organisms. Rather, they are just one part of the mycelia lurking beneath the ground.
The second theory, which is presented in the investigations of Japanese scientists on the Tricholoma matsutake species, shows that fairy rings could be established by connecting neighbouring oval genets of these mushrooms. If they make an arc or a ring, they continuously grow about the centre of this object.

One of the manifestations of fairy ring growth is a necrotic zone—an area in which grass or other plant life has withered or died. These are caused by the mycelia, which during a very dry year coat the roots of grasses and other herbs in meadows. After some time they are removed by biotic factors from the ground, at which stage a zone on the surface soil becomes visible. Patterns other than the basic ring or arc are also possible: circles, doubled arcs, sickle-shaped arcs, and other complicated formations are also formed by this process. Fungi can deplete the soil of readily available nutrients like nitrogen, causing plants growing within the circle to be stressed which leads to plant discoloration. Some fungi also produce chemicals that act like hormones called gibberellins, which affects plant growth, causing rapid luxuriant growth.
Long-term observations of fairy rings on Shillingstone Hill, England, further suggested that the cycle depended on the continuous presence of rabbits. Chalky soils on higher elevations in the counties of Wiltshire and Dorset (U.K.) used to support many meadow-type fairy rings. Rabbits crop grass very short in open areas and produce nitrogen-rich droppings. Mushrooms need more soil nitrogen than grass does. A ring can start when a single mushroom drops its spores around itself. Subsequent generations of fungi grow only outwards, because the parent generations have depleted their local nitrogen levels. Meanwhile, rabbits keep cropping the grass, but do not eat the fungi, allowing them to grow through their competition to tower, relatively, above the grass. By the time a circle of mushrooms reaches about 6 metres (20 ft) in diameter, rabbit droppings have replenished the nitrogen levels near the centre of the circle, and a secondary ring may start to grow inside the first.
(Wikipedia)
Posted by Islay Natural History Trust at 19:41