30 Years is a long time and one to celebrate so this is what we are doing Thursday 4th December at the Natural History Centre in Port Charlotte.  We have been looking through old photos of the centre over the years and wildlife and will have an evening of photos and share memories whilst enjoying a 'pot luck supper'.  A time to socialise with all those who have been involved and joined in our activities and visited us over the years.  If anyone has photos they wish to share then please bring them along or send to us via email.  We are particularly short of pictures from the early years. 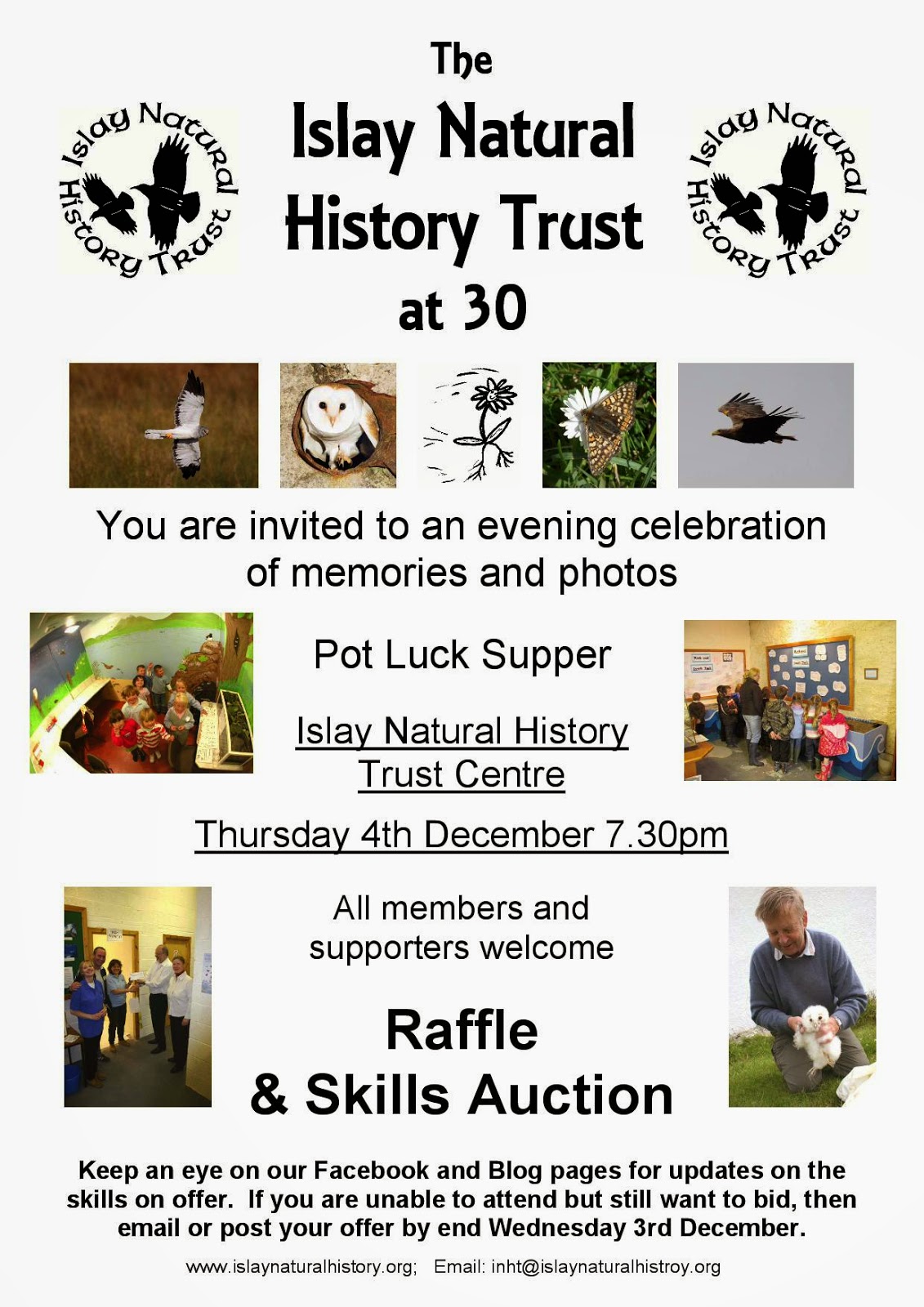 There will also be a raffle and for those who would like to bid there will be a silent auction of skills and services provided by many of our committee and supporters great Christmas presents perhaps for those people who have everything whilst supporting the Trust.
So far we have available:

We are happy to receive bids prior to the event, emailed or posted but must arrive by mid-day on Thursday 4th.

Hope to see many of you there.
Fiona
Posted by Islay Natural History Trust at 12:41 1 comment:

A festival of colour on a dull day


A festival of colour on a dull day 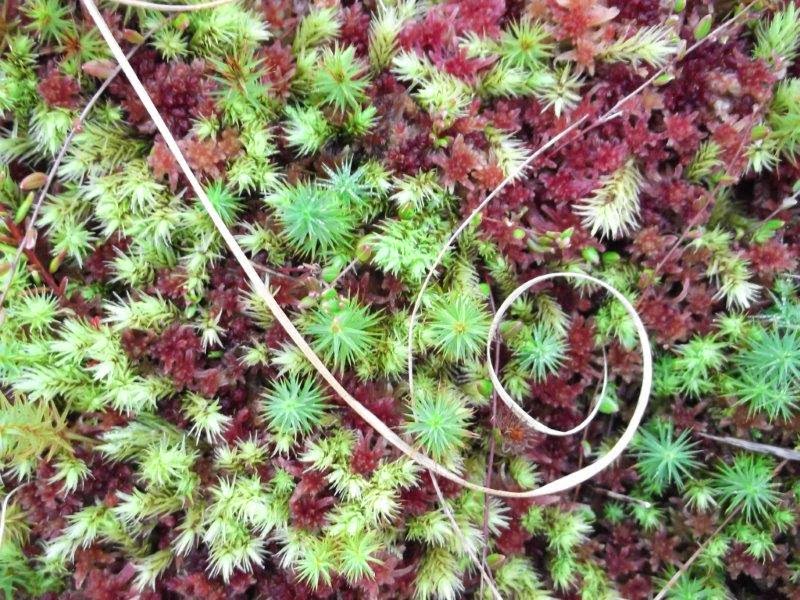 It may have been a dull and gloomy type of day with overcast skies, the poor light sucking out the definition in the landscape and Islay on the edge of the fog bank over Northern Ireland, but, as Becky and I discovered on what was essentially a two dimensional featureless landscape, the 'raised beach' on the south side of the Gruinart Flats, there was a wealth of colour and gems forming a Persian rug below our feet. 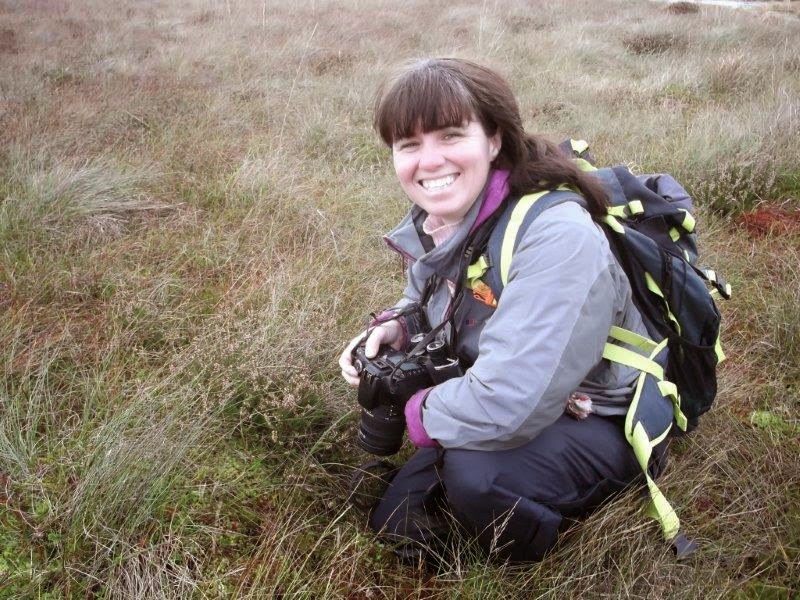 It has been many years since I walked the 'raised beach' at the back of the 'Flats' at Loch Gruinart, which holds fond memories of watching to pinpoint Hen Harrier nests and checking Buzzard nests for lapwing chick remains for research projects.  My memory was of high quality peat bog.  Becky had not had the pleasure of walking this ground so it was great to take her up there, bag a few Km squares and revisit this old haunt. 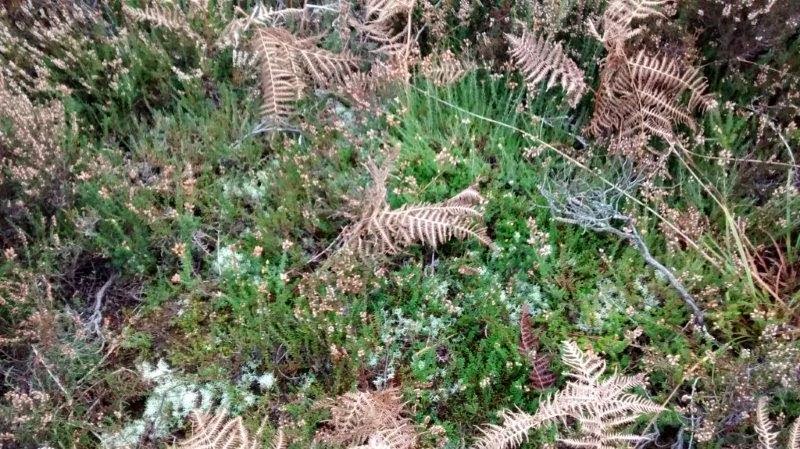 Much of the Calluna heather along the sides of the escarpment is old, and has grown tall and leggy, flopping over to reveal the open area beneath, I remember from old school ecology lessons in succession, that old heather should flop over and the increased light allow fresh new shoots to develop and grow.  I always wondered whether this was actually true as often once exposed the open peat would be colonised by Mollinia grass which would allow little light and inhibit heather development.  I was therefore pleasantly surprised to see an area of old heather with young shoot growing up in the open canopy of flopped old branches. 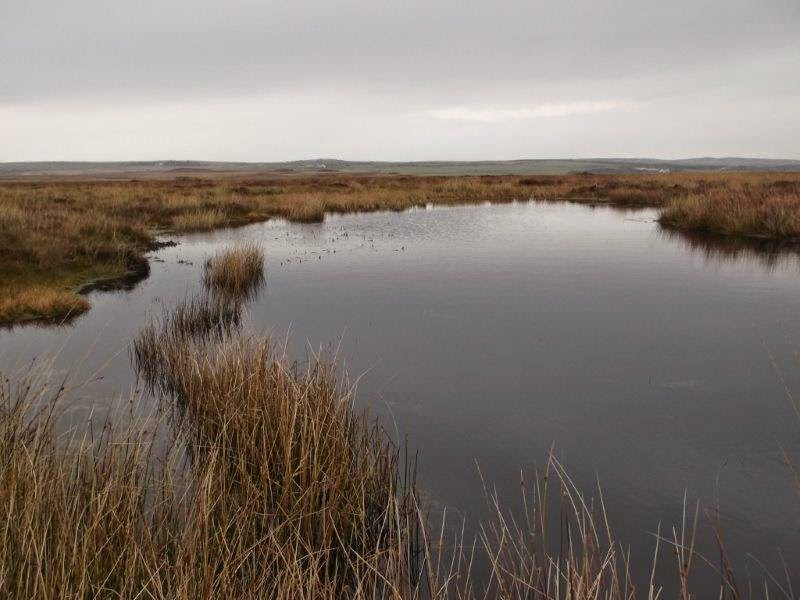 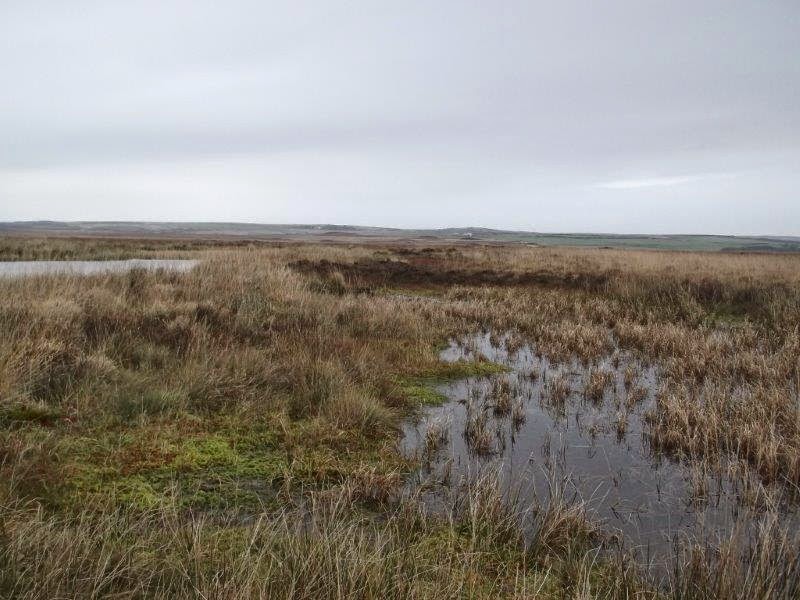 There are bog pools on the top of the raised hill area, the odd deer path traverses the peat, but there is little disturbance to the ground and the peatland vegetation is undamaged and left to thrive.  Underfoot the soft sphagnum mosses provide a spongy carpet, garishly patterned with deep reds, browns, greens and orange.  Sphagnum capillifolium forms red hummocks rising above the flat ground whilst saturated in the bog pools are the soggy 'drowned cat' forms of the green Sphagnum cuspidatum.  On the look out for the less common hummock form of Sphagnum fuscum we did chance upon a small hummock, but not in as good a condition as I have seen before. 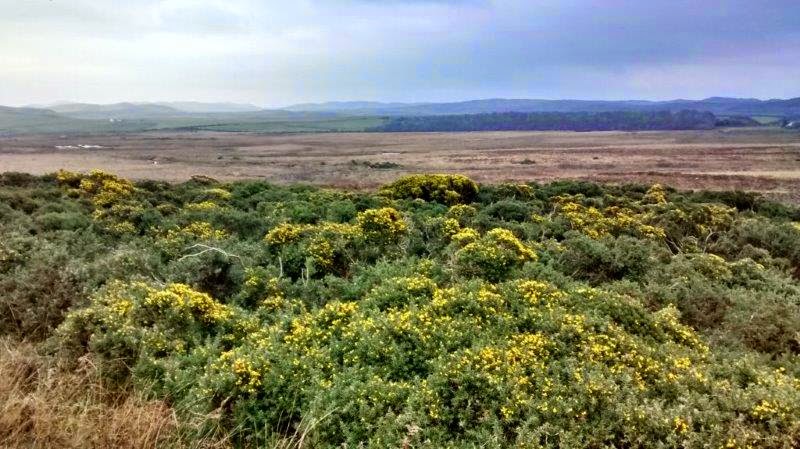 The bushes of the gorse have sprung back into colour within the last month or two and the golden yellow flowers brightened up the dullness of the day.  ﻿﻿

A dose of waxcap fungi on some sheep grazed pasture completed the festival of colour in the dullness of the day.
﻿﻿﻿﻿ 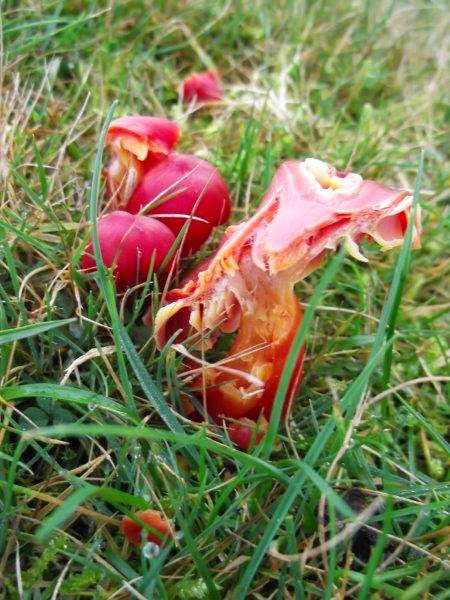 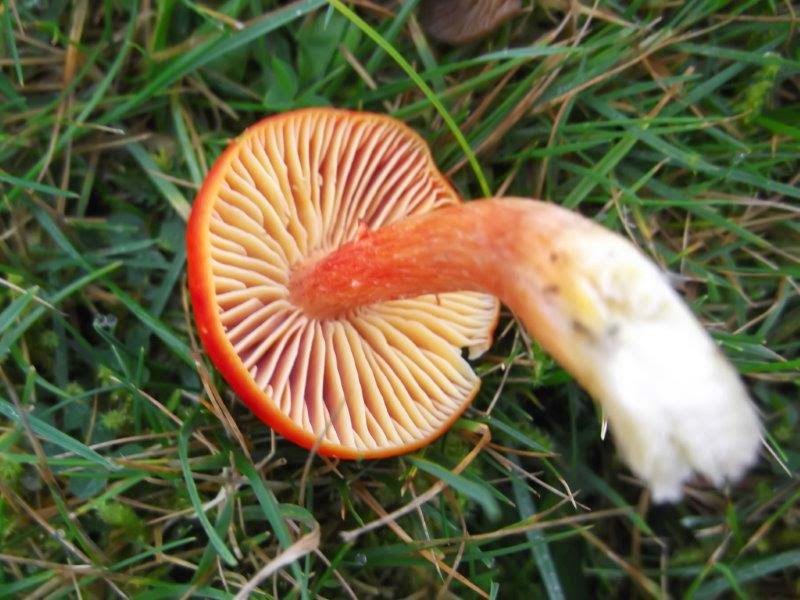 A talk about Galapagos and the amazing wildlife there 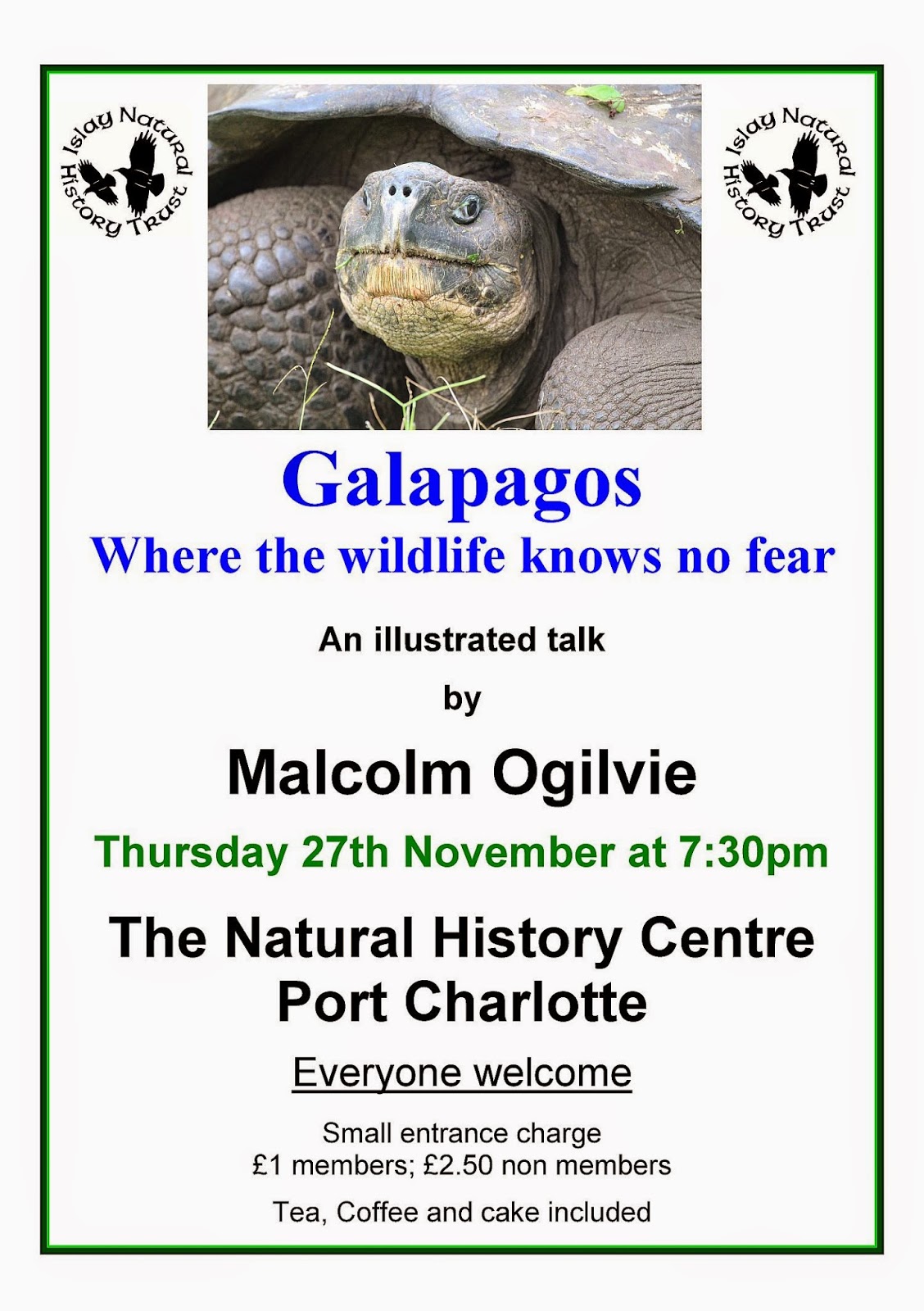 Posted by Islay Natural History Trust at 20:26 No comments: 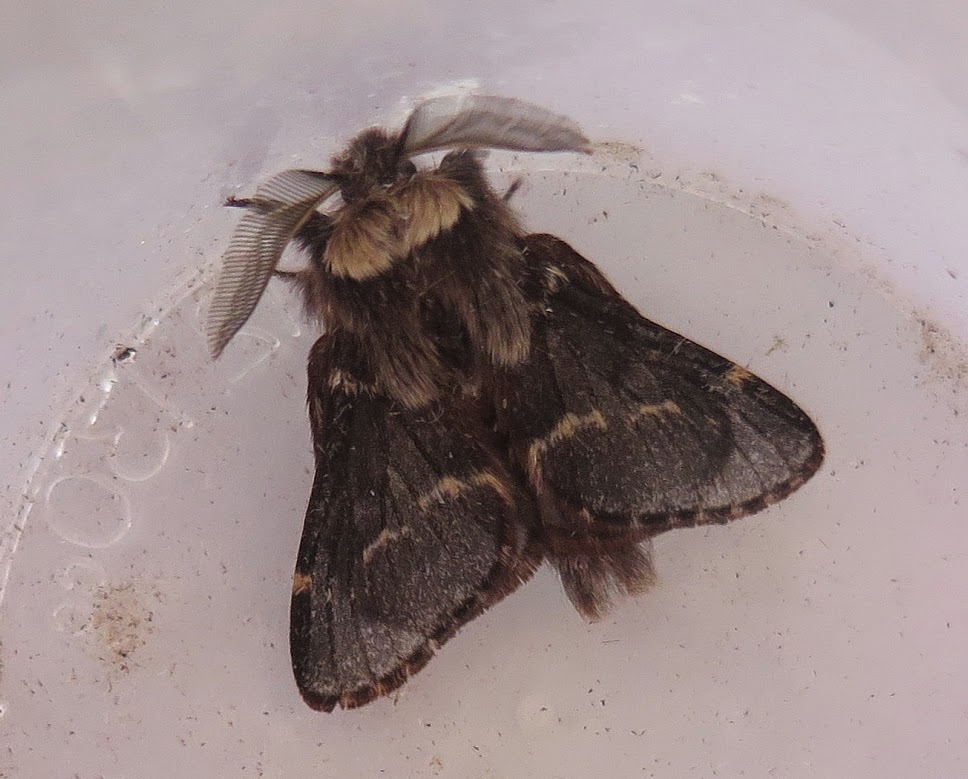 ﻿﻿﻿﻿ ﻿﻿﻿﻿ This lovely picture of a sunstar found by Lee and Aileen Thickett during their visit in October. "25 years ago (we have been visiting Islay for 33 years) while rock-pooling near Bunnahabhain on 25th Oct 1999 we found a Sunstar Starfish on Rubha Bhachlaig at NR 420747. Despite rock-pooling all over the inner isles and Western Isles we have never found this animal on the inter-tidal anywhere else. Due to a bit of good planning we arrived at the same site on 9th October this year at a time of extra low tide during the main part of the day. We were gob-smacked to find a Sunstar again!!!!! What are the odds against it?"
Posted by Islay Natural History Trust at 12:54 2 comments:

Posted by Islay Natural History Trust at 10:01 No comments:

I caught this tiny (6–9 mm long) micro-moth in my garden a month ago. I was fairly certain of its identification (unlike many micro-moths, there aren't lots of other species all looking very similar), but have waited for confirmation from the ever-helpful expert, Danny Arnold. Although common and widespread across Britain, this is only the third record for Islay, the previous two dating from the early 1970s. Its caterpillars feed on the leaves of roses, and members of the rose family like bramble, hawthorn, blackthorn, apple and pear trees.
Malcolm 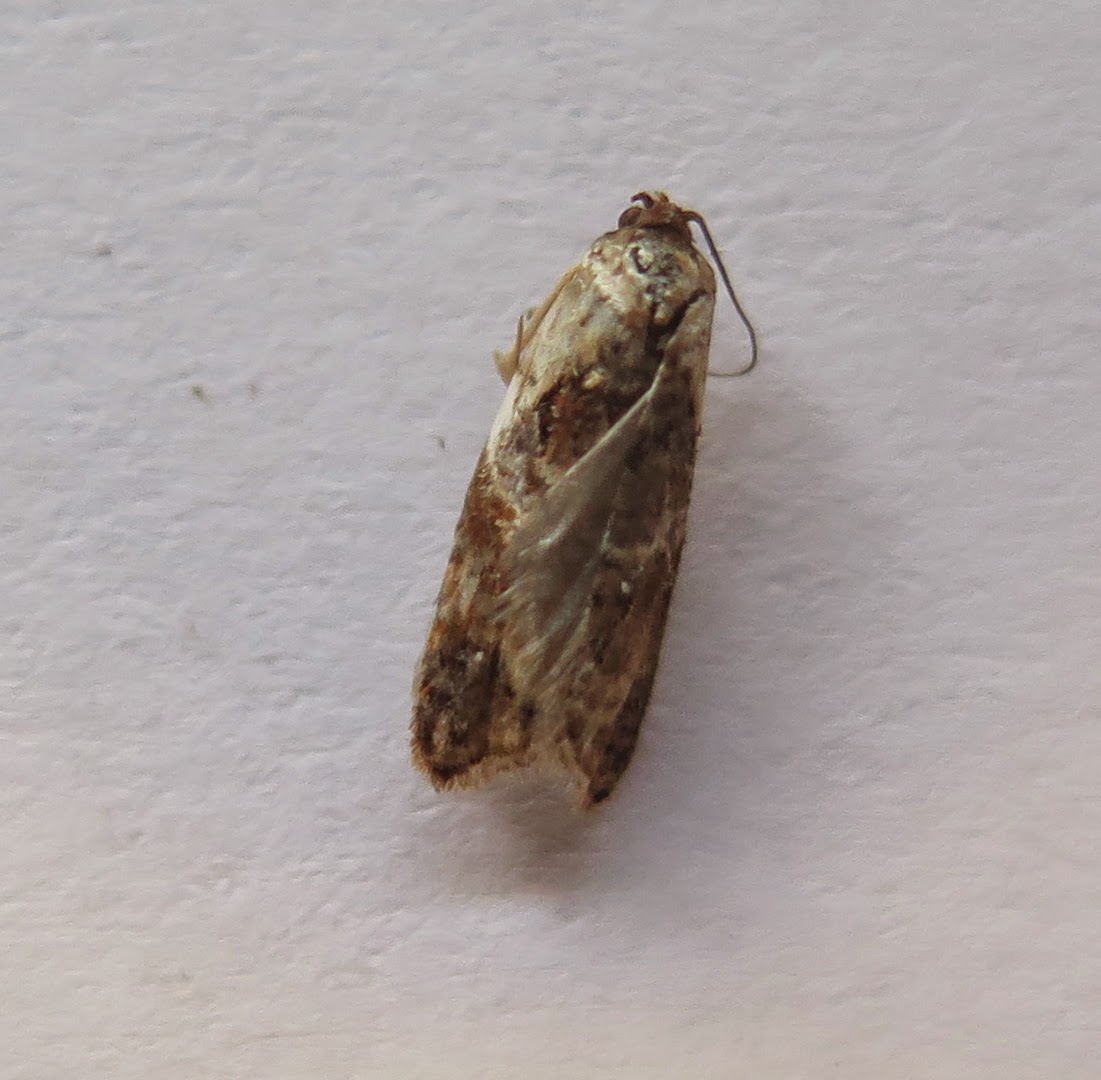