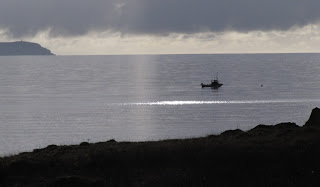 The small fishing boats that operate in Loch Indaal are using creels to catch crabs and lobster - the biggest part of the their catch being the Velvet Swimming Crabs that are exported to Spain.  Very few are eaten in the UK, although I did go to a reception at Lagavulin during the Jazz Festival in September when whole Velvets were served by the Harbour Inn, which was good to see. 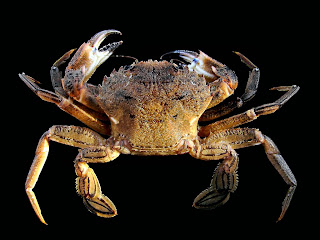 The velvet crab is the largest swimming crab (family Portunidae) found in British coastal waters, with a carapace width of up to 100 millimetres (3.9 in), and the only species in the genus Necora. The body is coated with short hairs, giving the animal a velvety texture, hence the common name.  It lives from southern Norway to Western Sahara in the North Sea and north Atlantic as well as western parts of the Mediterranean Sea, on rocky bottoms from the shoreline to a depth of about 65 metres. The last pair of pereiopods are flattened to facilitate swimming.
Posted by Islay Natural History Trust at 10:20