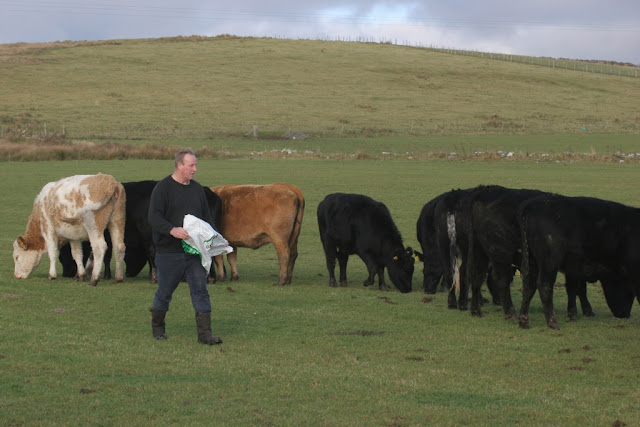 Most of the cattle at Octomore are Aberdeen Angus crosses.  Apart from the Highlander, all James' bulls are Angus and he has a mixture of cows including Simmental, Limousin and Beef Shorthorn producing the hybrid calves that are sold as beef "stores".

"Store cattle" are defined as "animals which have been grown slowly so that their skeletal development is not impaired, but muscle tissue is slightly below the animals potential and fatty tissue is not developed."  The production of stores is the classic modus operandii of beef farmers in the Western Isles.  They are then sent to the mainland for fattening before slaughter.  This has been the pattern of production for thousands of years and it still continues today.

Across the track from the Highlanders are a small of group of heifers who will be run with the bull in the spring for the first time.  Again, James was feeding them cake largely to make them easier to control.
Posted by Islay Natural History Trust at 17:49