Despite lots of people looking for it, including many who travelled here from different parts of Britain, the Ascension Frigatebird has not been seen again. Indeed, the claimed sighting of it flying over the head of Loch Indaal at 4.00 pm on the same day it was seen in Bowmore has not been verified. There was another red herring sighting when it was reported as having been seen sitting on a fishing boat belonging to someone who regularly fishes off Portnahaven. This led to the not unreasonable assumption that it was sitting on the boat while at sea off that village several miles south of Bowmore. Not a bit of it, as the boat in question was moored in Bowmore Harbour at the time!
This morning, I received two more photographs of the bird, taken by some non-birders from Norway who were sitting having breakfast in the Harbour Inn, Bowmore, which overlooks the pier, and saw the bird land on the pier about 8.10 am or about quarter of an hour before Jim Sim spotted it. They were sufficiently intrigued to go outside and photograph it before returning to their breakfast, but didn't realise the significance of what they had seen until showing the photographs yesterday to someone from the RSPB who was manning a stall on the Arran ferry. So thanks very much to Dr Vernon Boanrjee from Stavanger. One of his photos is more or less identical to Jim Sim's, but here is his second one.
Malcolm 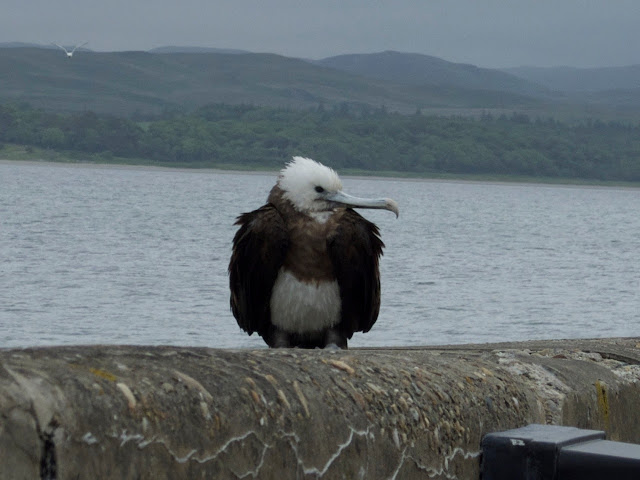