Back to the natural history, after the brief dalliance with the worlds of sport and aviation. The below picture was taken on Port Charlotte beach while I was poking around in the rock pools looking for things for the ever-hungry INHT lobster to eat.

The Common periwinkle (Littorina littorea) is probably the most commonly found mollusc around the shores here on Islay, along with the Dog whelk (Nucella lapillus). Scotland alone exports over 2,000 tonnes annually. It is mainly found on rocks and in pools around the high and middle tide zones, and feeds on algae and barnacle larvae. Some can live up to 10 years.

Lichens occur in one form or another in almost every environment, and thrive on rocky sea shores, of which Islay has plenty. Lichens are a combination of a fungus and an algae growing together. The fungus element makes up most of the body of the lichen but it is the algae component that provides its nutrients through photosynthesis. I think the example below is Caloplaca thallincola, but I'm happy to be corrected by any lichen experts out there! 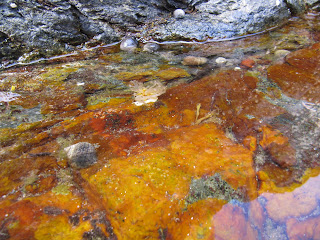