Caught off Wester Ellister this afternoon and ready to go on the barbeque.  There are two common members of the Pollock family regularly found in the coastal waters off Islay, this is the lythe, usually larger and more palatable than the saithe (usually called puchie on Islay - scientific name Pollachius virens)  The puchie is not as green on the back as the lythe and its lateral line runs straight - you will see how the lateral line on this lythe has a distinct curve upwards. 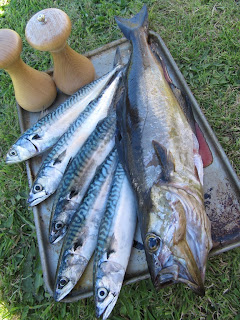 The familiar Atlantic mackerel is still abundant around these shores in the summer months.  Each female lays around a million eggs when they spawn.  Barbequed straight from the sea like this they are, in my opinion, absolutely delicious.
Carl
Posted by Islay Natural History Trust at 21:16