The heather is just coming out nicely now, and among one large expanse was this white-flowered plant. I found the following on a mythology page on the internet:
"The idea that white heather is lucky was popularised by the Victorians and their love of Scottish traditions. In 1884 Queen Victoria herself wrote about her servant Mr Brown, who "espied a piece of white heather, and jumped off to pick it. No Highlander would pass by it without picking it, for it was considered to bring good luck." White heather's luck may have been attributed to it because of its scarcity, in the same way that four-leaf clovers brought other Celts luck. Other interpretations include the more romantic notion that white heather grows over the final resting places of faeries, or the idea that in a country of many ancient battles, white heather grew on patches of ground where no blood had been shed. Indeed white heather's luck appears originally to have been associated mainly with battles; in 1544 Clan Ranald attributed a victory to the fact they had worn white heather in their bonnets, and Cluny of Clan MacPherson attributed his escape after Culloden to the fact that searchers had overlooked him whilst he slept on a patch of white heather." 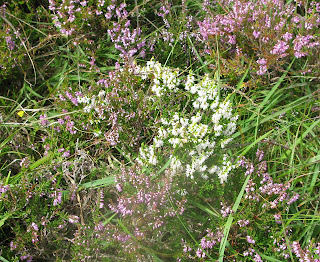 I can't confirm that there is the final resting place of a faerie where I found it!