This big, rotund, trundly beetle is quite common on Islay moorland - I quite often see them crossing sheep tracks.  It is very black on top and very metallic blue underneath (although sometimes the sheen is almost copper coloured).  It lays its eggs in a burrow that it digs under cattle dung and lays in a supply of the yummy smelly stuff for its larvae to feed on.

Dor beetles (or dung beetles as they are sometimes unromantically called called) are useful beasts because their many burrows beneath cow pats greatly aid their decomposition - benefitting the soil.  They are badly affected by invermectin de-wormers for cattle.  The ancient Egyptians had the right attitude to Dor beetles (which are members of the scarab beetle family) - they considered them to be sacred.  Quite right too.

Most Dor beetles carry a number of parasites which can be seen clinging on to their undersides if you turn them over, but I don't know what they are. 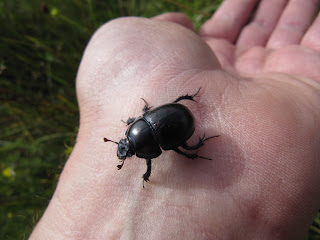 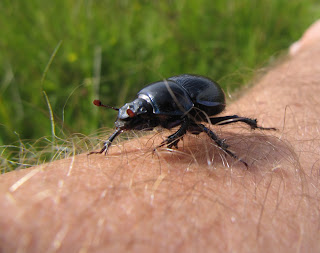 They fly at night - often coming to lamps while making a droning noise....
Carl
Posted by Islay Natural History Trust at 17:22