Where are the Barnacles? 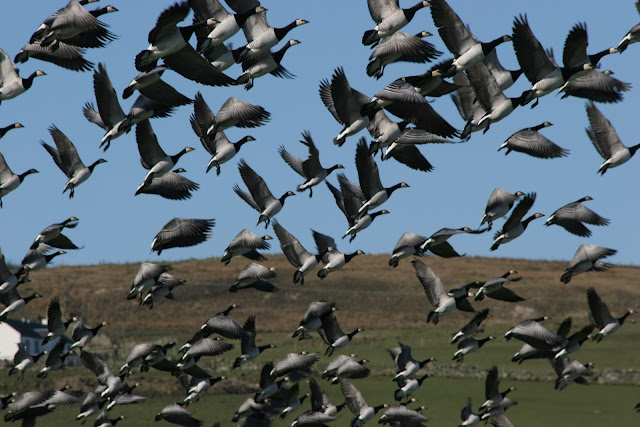 I cycled down to Portnahaven yesterday, and then around Loch Indaal this morning to Uiskentuie, pedalling along the Gruinart Flats, followed by a circumnavigation of Loch Gorm and back via Rockside.  There were the usual parties of Whitefronts, and small flocks of Greylags, but the big battalions of Barnacle geese which one would normally encounter regularly on such a ride were nowhere to be seen.  The biggest flock was about 200 at Rock Mountain.  My very unofficial impressions will need to be confirmed by the SNH goose counters, but things are certainly very different in Goose World at the moment.

There were plenty of other birds about - including a good sized flock of Lapwings at Ballinaby and lots of Curlews and corvids feeding on the fields.  A Kestrel pretended to be a Merlin for a while at Carnduncan, and there were some Reed buntings cheering up the hedgerows around Gorm.
Carl
Posted by Islay Natural History Trust at 14:26