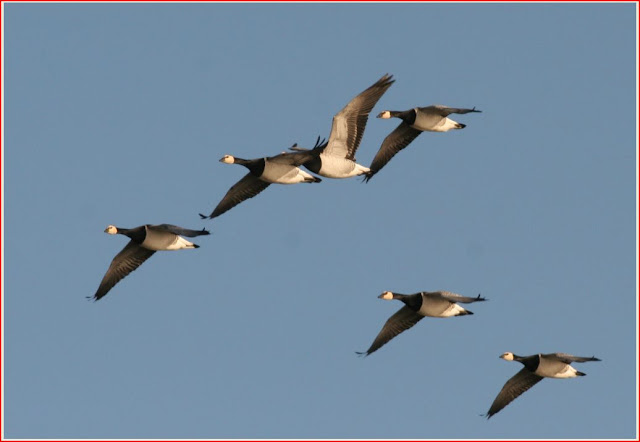 This shot of Barnacle geese flying overhead illustrates the extraordinary stresses to which the primary feathers on the end of the wing are subjected in flight.  The central shaft of the feather (called the rachis) has to be extremely flexible and able to withstand many hundreds of thousands of flexings without breaking.
The vane of the feather is made up of a series of barbs which are locked together by hooked structures called barbules.  The bird is able to relock these barbules, should they become separated, by running the feather through its beak.  Being able to do this repair work is essential to the birds ability to maintain itself in an airworthy condition.
It is the primary feathers (of which there are ten on each wing I believe) which provide the forward thrust for flight, the secondary feathers, inboard of the primaries, are the ones which make up the aerofoil which provides the lift for the wing.
Carl
Posted by Islay Natural History Trust at 23:17