People with fish on Bowmore Pier 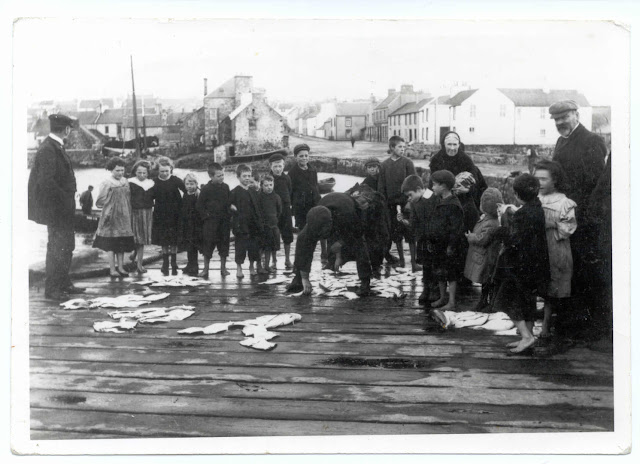 I thought it would be good to put some old photographs from Islay up on the blog.  This is quite a well known shot of a group showing off their catch on Bowmore pier.  Most of the fish appear to be flatfish - good sized plaice probably.  You can just see a man in a skiff behind the group to the left of the photograph.  There is another skiff drawn up on the slip.  The surface of the pier appears to have been wooden in those days.

You will notice that very few of the children are wearing shoes.

I have heard of people trying to catch white fish in Loch Indaal in the recent past, but have never heard of anyone being successful with anything apart from puchie (Saithe or Coalfish Pollachius virens) and Lythe (Pollock Pollachius pollachius).  I have never heard of anyone catching significant numbers of flatfish in recent years - which is probably a legacy of over zealous trawling.

Photo is from the Museum of Islay Life