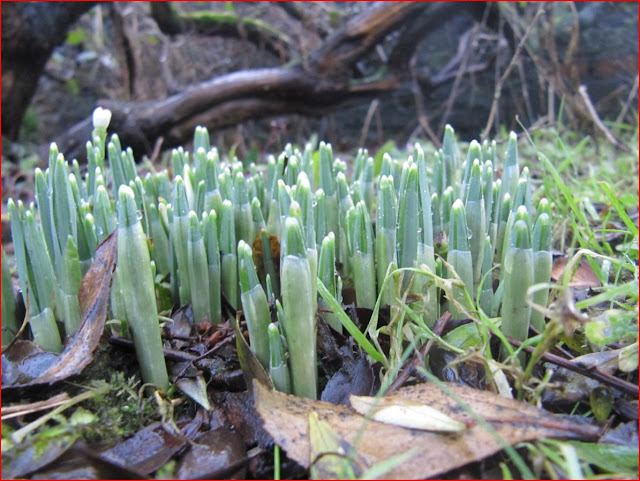 It is not a great day outside today - lots of sharp showers interspersed by mostly grey skies, and although the strong southerly wind of this morning is dropping, it has been a day for staying indoors and catching up on a few tasks.  I have ventured out a few times however, and thought it would be good to include a picture of snowdrops in the garden pushing their way upwards and heralding at least the start of the end of what seems to have been a very long winter already.

Incidentally, being unaware of the scientific name of the snowdrop, I visited the always excellent Wikipedia and came across the following:

"Some snowdrop species are threatened in their wild habitats, and in most countries it is now illegal to collect bulbs from the wild. Under CITES regulations, international trade in any quantity of Galanthus, whether bulbs, live plants or even dead ones, is illegal without a CITES permit. This applies to hybrids and named cultivars as well as species. CITES does, however, allow a limited trade in wild-collected bulbs of just three species (G. nivalis, G, elwesii and G. woronowii) from Turkey and Georgia."

I am aware that large quantities of snowdrops have been harvested (commercially) from the colossal colonies in Bridgend Woods for a number of years, which would seem to be at odds with the above.  Does anyone have any more information about this?

CITES (the Convention on International Trade in Endangered Species of Wild Fauna and Flora, also known as the Washington Convention) is an international agreement between governments, drafted as a result of a resolution adopted in 1963 at a meeting of members of the International Union for the Conservation of Nature (IUCN). The text of the convention was agreed upon in 1973, and CITES entered into force on 1 July 1975. Its aim is to ensure that international trade in specimens of wild animals and plants does not threaten their survival and it accords varying degrees of protection to more than 33,000 species of animals and plants.
Posted by Islay Natural History Trust at 15:53