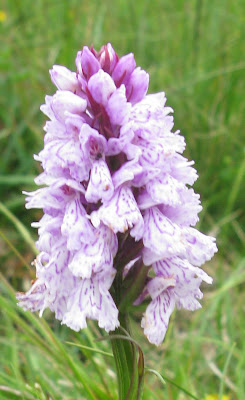 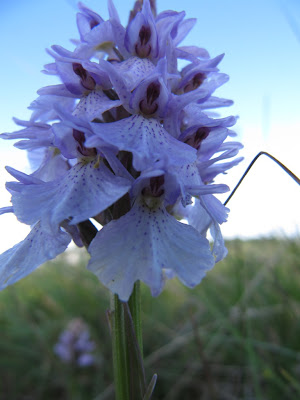 Carl posted a photo of a Common Spotted Orchid a couple of days ago. Here it is again (on the right - or below, as the layout of the photos varies with screen width!), together with a photo of a Heath Spotted Orchid. The most obvious difference is the shape of the lowest petal - the 'lip' - which has a distinct middle lobe in the Common Spotted while it hardly shows as a lobe at all in the Heath Spotted. Both species are very variable in colour, from almost white to purple. The Heath Spotted is more numerous and widespread because it likes acid soils of which there is much more on Islay than neutral or alkaline. If you can find the boundary between the limestone and the acid rocks, as you can near Ballygrant, for example, you can see the two species growing close together each on its own preferred soil.