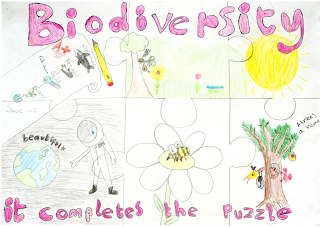 Alice Grey from Port Ellen School has been named the winner of a UK wide 2010 International Year of Biodiversity Competition organised by the UK National Commission for UNESCO. Alice’s winning entry was praised by the judges for using jigsaw imagery to show how all living things are linked, displaying a strong understanding of biodiversity.

Christopher Patterson, also from Port Ellen Primary School, was named runner up. His entry was deemed by the judges to be very artistic and colourful with a striking design that would work well as a reproduced logo or postcard.

The winning entries are displayed on the website of the UK National Commission for UNESCO and the competition will also be featured in the next edition of the newsletter for UNESCO Associated Schools International which will be sent to schools in 180 countries.

The competition was judged by Diana Garnham (Chief Executive, the Science Council), Felix Pepler (Creative Education Consultant) and Leo Vincent (UNESCO Associated Schools in the UK). Diana Garnham said: “The competition entries were outstanding and we had a really enjoyable – and difficult – task to choose the winners. There was inspiring creativity and students demonstrated a real understanding of the challenges to biodiversity as well as of the need for us to take action. Well done to all who took part and especially to the prize-winning entries!”

The competition called for children and young people to help raise awareness of the International Year of Biodiversity by creating an eye catching campaign to celebrate and underline the importance of biodiversity. The United Nations has designated 2010 as the International Year of Biodiversity (IYB) to celebrate the importance of biodiversity and highlight the different threats facing this irreplaceable natural wealth across the globe.

As part of its work to promote the International Year, the UK National Commission has produced an information pack for schools entitled ‘Biodiversity is Life’. The pack includes practical suggestions for how schools can celebrate the International Year of Biodiversity and examples of how UNESCO helps protect biodiversity in the UK, including case studies from UNESCO Biosphere Reserves and natural World Heritage Sites which have distinct biodiversity, including St Kilda.
Posted by Islay Natural History Trust at 15:44