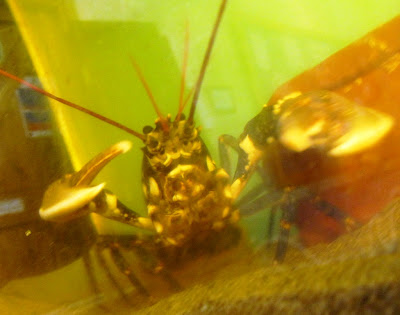 Lobsters are supposed to be noctural beasts, hiding away during the day and only coming out at night to feed. Not so our lobster at the Wildlife Centre who although he has been provided with a nice clay drainpipe to disappear into, seems to be a bit of a showoff and is out most of the day - particularly if there is someone to talk to. When he first arrived he was kind of nervous and although he would come out, he would shoot back into his hole at the slightest movement. Now he appears to be much more confident - and it takes a serious disturbance to make him retreat.

He started off by eating mostly limpets, easily crushing the shells with his massive claws, but has since decided that he prefers mussels - presumably they are less hassle to open and, as any hominid seafood fan will attest, taste much better than limpets. He certainly seems to be growing anyway so we are hopeful that he will be shedding his exoskeleton sometime soon.
Posted by Islay Natural History Trust at 12:26