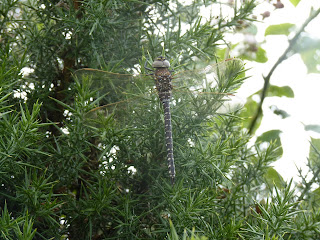 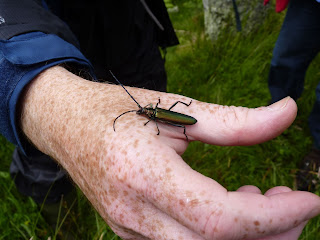 Yesterday we scoured Islay's east coast for the Purple Hairstreak Butterfly - without success, but look what we found instead!

The top picture is the female Common Hawker (Aeshna juncea), a species which is widespread and common throughout Britain. Much more exciting was the Longhorn Beetle that Elaine found. It was well over an inch long with impressive antennae that are longer than its entire body length in males and equal to its body length in females. Its scientific name is Aromia moschata because it emits a distinctive smell (didn't ask Tim to check this after he'd held it!) and its English name is simply Musk Beetle - a bit of a plain name for such a beautiful creature if you ask me!

The Common Hawker was seen at Claggain Bay and the Musk Beetle at Ardilistry.