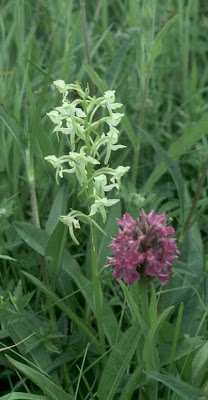 The site close to where I live in Bruichladdich some years has nearly 100 flowering spikes, some years hardly any. Last year there were just six. This year a search of part of it revealed 12. It's clearly not a good year for the site, though, because in past years there have been dozens of spotted and marsh orchid spikes, too, and this year there are very few. I suspect it dried out too much during May and June.
The photo shows a Greater Butterlly Orchid with a (very small) Northern Marsh Orchid alongside.