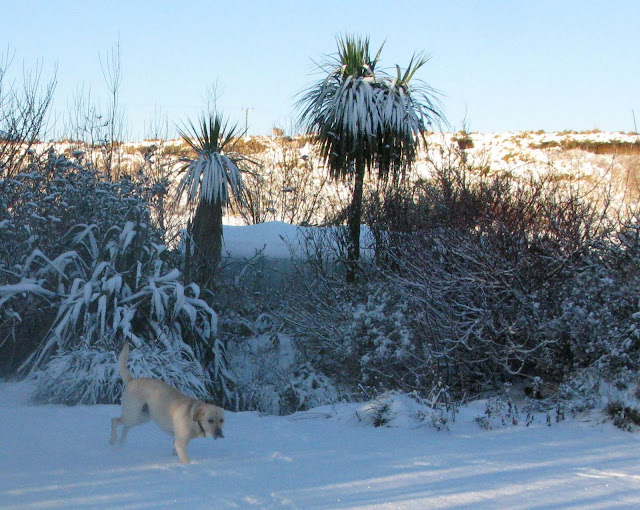 One of the pleasures of an Islay garden is that one can grow a variety of plants which are susceptible to frost and so aren't as easy to grow away from the west coast. This photograph, taken last week, shows two New Zealand Cabbage Palms (Cordyline australis). They are not fully hardy in much of Britain (as one of their other common names - Torbay Palm - confirms). In a short but intense period of frost and cold easterlies in winter 1995-96, several on the island died back to the ground, though most then resprouted. We acquired these after 1996 so I will be watching them to see what happens in the coming weeks. Below them to the right is one of a number of Hebes in the garden (they are also southern hemisphere plants). We lost some in the cold last January-February as we did in 1995-96. Sometimes they resprout from the ground, but more often they are killed off completely. To the left with the long strap-like leaves is a New Zealand Flax (Phormium tenax). These have a reputation for being tender and some books recommend protecting them from hard frosts. Like the Cabbage Palms, we didn't have it 15 years ago. So, we'll just have to wait and see whether we can continue to grow frost-tender plants in our garden or whether we will have change to hardier kinds. But then gardening wouldn't be so much fun if it was easy!
Malcolm
Posted by Islay Natural History Trust at 08:51