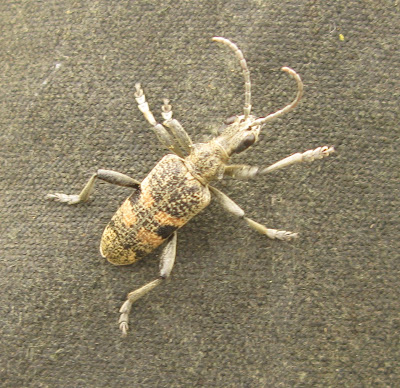 This splendid longhorn beetle, just over 2.5 cm (an inch) long, including its antennae, was found by Gordon Yates when we visited the Narrow-leaved Helleborine site this week. I photographed it as it clambered about on his jacket. Its scientific name is Rhagium mordax. Like a lot of beetles, it doesn't have a well-known vernacular name, though on one website I found it is called the black-spotted longhorn beetle. It is reported to be common and widespread in Britain in and around woodlands and larger gardens, though as far as I can tell this is the first record for Islay. But that's not saying much (!), as our beetles have been very poorly studied.
Malcolm
Posted by Islay Natural History Trust at 17:43