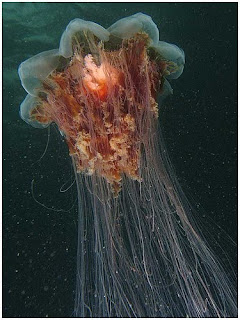 It was a perfect evening for the crossing and we left Kennacraig on the 18.00 departure in virtually flat calm with only a few patches of breeze to ruffle small sections of a mostly glassy sea. Visibiliity was excellent but it was actually quite quiet with just the usual groups of Guillemots with a few Razorbills to keep the scattered Kittiwakes and Gannets company. I saw two small groups of manx shearwaters. There were a few terns and a total of five porpoises were spotted, mostly very distant with only one really close to the boat. Sadly no larter cetaceans or Basking sharks.
There were a lot of Lions mane jellyfish (Cyenea capillata). These are the big brown jobs with enormously long trailing tentacles that deliver a sting akin to a nettle. Being stung by these tentacles as they whip around the haulers is an occupational hazard for creel fishermen as I remember well. Bad news if you get one in the eye, but the sting subsides after about half an hour and they dont do lasting damage.
There were plenty of red deer in evidence on the hills of both Islay and Jura as we steamed up the Sound towards Port Askaig and there were numbers of (presumably) Common seals hauled out on the shore of Am Fraoch Eilean.
Carl

Picture of jellyfish from Wikipedia
Posted by Islay Natural History Trust at 00:28