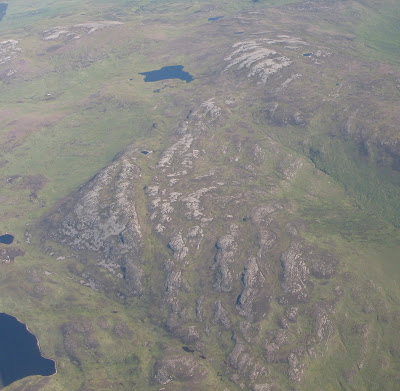 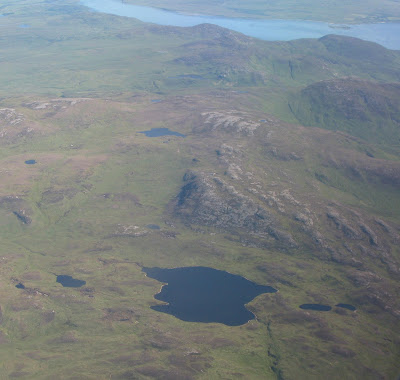 Last Tuesday morning, when Becky was preparing herself for the long slog up to the summit of this hill, I had a look at it the easy way, from the air, as the 'plane flew past it in good weather and I had my camera with me, and had made sure I was in one of the few seats on the plane with a good view - not obstructed by engine or wing. So here are two views of the hill, both from the south-west, showing the bare rock of the summit, and of adjacent hills. The large loch in the foreground of the lower photo is called Loch Beinn Uraraidh. I only got back this morning and have a few more aerial photos I may post in a day or two.
The following is history rather than natural history. The aircraft wreckage which Becky mentions is of a Bristol Beaufighter. A squadron of them was based at the airport during the second world war. Two of them crashed within minutes of each other on 12th September 1943. Both were engaged on night training flights. One crashed very close to the airport almost immediately followed by the one Becky saw, the pilot of which it is thought may have been distracted by the first crash and failed to clear the rising ground to the east of the airport. Sadly, there were no survivors.
Malcolm
Posted by Islay Natural History Trust at 16:43