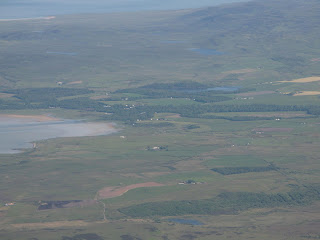 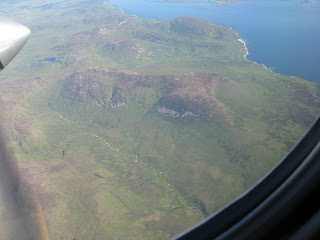 Here are Bridgend and Beinn Bheigeir.

The area of Bridgend Woods closest to the shore, around the head of the loch, was first planted in the 1850s, to give shelter, to provide sport (Woodcock and Roe Deer) and as an amenity - hence the carriage rides running through the woods, out to and beyond the Wool Mill. All that woodland is part of a designed landscape recognised as such by Historic Scotland. The plantations to the west (Winter Covert) and around Loch Skerrols came later. In the foreground is Loch Tallant, with its extensive reedbed running to the right of the water, while above it is Tallant Wood, a very nice piece of woodland in which oak trees predominate.

Beinn Bheigeir is Islay's highest hill (460 m). The highest point is on the left-hand ridge, but the broader right-hand ridge is nearly as high (456 m). Nearly 20 years ago, I found a pair of Ring Ousels breeding in the scree slopes of this hill (the first breeding record for Islay). A few more pairs were found later on adjacent hills. It was good to learn from the RAF Ornithological Society who visited this area in 2009 specifically to look for Ring Ousels, that they were still there.

For those new to blogs, if you click on a photograph you will get a much larger image. Well worth doing with these aerial shots.