These two photographs were taken yesterday morning (5th July) at Bowmore Pier by holidaymaker Jim Sim from Renfrewshire and show Britain's (and Ireland's) second-ever record of an Ascension Frigatebird. It was first seen sitting on the pier wall before it took off. Word soon got around the island but, despite lots of looking for it throughout the day, it wasn't seen again until the afternoon when it was reported to have been spotted flying over the head of Loch Indaal. It is likely that a great many birders (=twitchers!) are on their way here, so there will be many more pairs of eyes searching the island and the skies for it today.
There is just one previous record of an Ascension Frigatebird in Britain and Ireland, back in 1953 when one was caught alive on Tiree, dying the next day. Initially thought to be a different species, a Magnificent Frigatebird from Cape Verde Islands or the Caribbean, the bird ended up as a skin in the National Museum of Scotland. It was not until 2003 that it was re-identified as an Ascension Frigatebird! There have been a handful of other Frigatebird sightings over the years, most unidentified as to species but including two definite Magnificent Frigatebirds (one on the Isle of Man in 1988 and one in Shropshire (!) in 2005, both of which were picked up in poor condition, taken into care and later died).
As its name implies, the Ascension Frigatebird is found only on Ascension Island in the South Atlantic breeding on the tiny (7.5 acres) nearby Boatswainbird Island with a population thought to number about 12,500 adults, plus an unknown number of immatures (they don't breed until they are several years old).
This is an immature bird (from the whitish head) and has travelled northwards for a minimum of 4,000 miles. There have been very few sightings more than about 100 miles from Ascension so it is not normally an ocean wanderer.
Frigatebirds get some of their food by piracy, chasing other seabirds until they disgorge the fish they are carrying back to their chicks (just like Great Skuas do), and this is thought to be the reason for their name, but they probably get most of their food by direct capture, snatching fish from the sea surface, not being able to dive, like Gannets, for example.
This remarkable sighting has already been posted on Ian Brooke's invaluable 'IslayBirds' blog, but it didn't seem something we could ignore here!
Malcolm 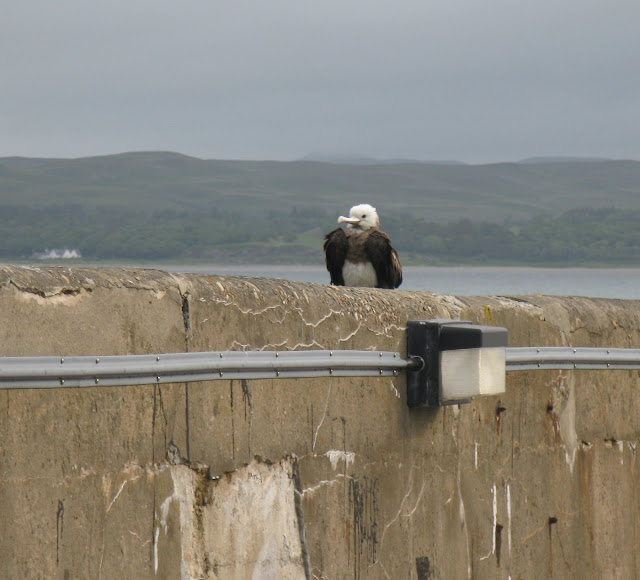 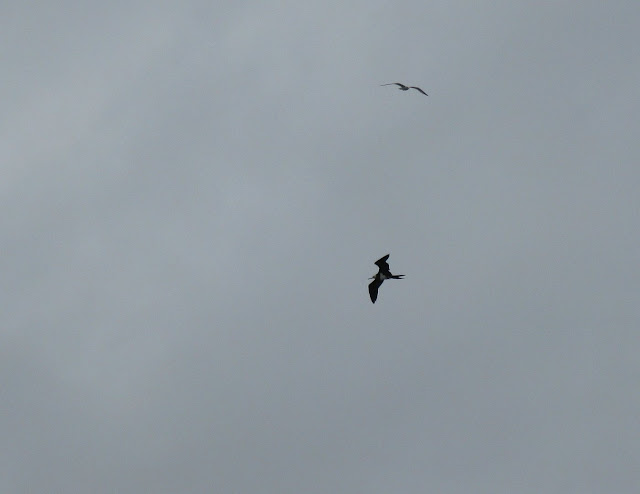