The travels of a Brent Goose

On 23rd April, a flock of about 80 Light-bellied Brent Geese fed on the shore in front of Loch Gorm House and I was able to read the letters on the leg rings that one bird was wearing. It had the letter 'N' on its right leg and 'J' on its left. I have now had the details of when and where it was ringed and other sightings of it.

So, after wintering regularly at Strangford Lough for a few years, it seems to have gone somewhere else in more recent winters. This will be somewhere in Ireland, but presumably where there are fewer observers. To be seen twice in Scotland on the same spring migration is unusual.
These Brent Geese breed in arctic Canada and all winter in Ireland. They make a 2,500 mile (c.4,000 km) migration twice a year, so the bird I saw, which will now be back in Canada having made its 16th journey, has travelled a minimum of 40,000 miles not counting all the shorter journeys it will have made in Ireland.
There's a lot more here: http://www.irishbrentgoose.org/
Here's a photo of some Brent on the Bruichladdich shore that I took a couple of years ago.
Malcolm 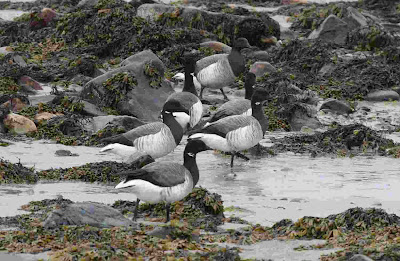