This one, which was crawling over a track on the Rinns, is a member of the family called rove beetles (the Staphylinidae). It doesn't seem to have a vernacular name, but its scientific name is Staphylinus erythropterus. It is related to the familiar Devil's Coach-horse Beetle and, like most rove beetles is both a predator on smaller insects and a scavenger of dead plants and animals. I've found a couple of 1980s records for Islay, both on the Rinns, but that's all.
Malcolm 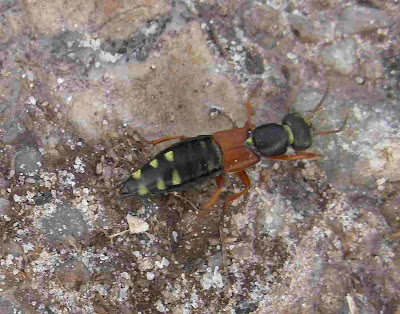