A second encounter with a Roe Deer 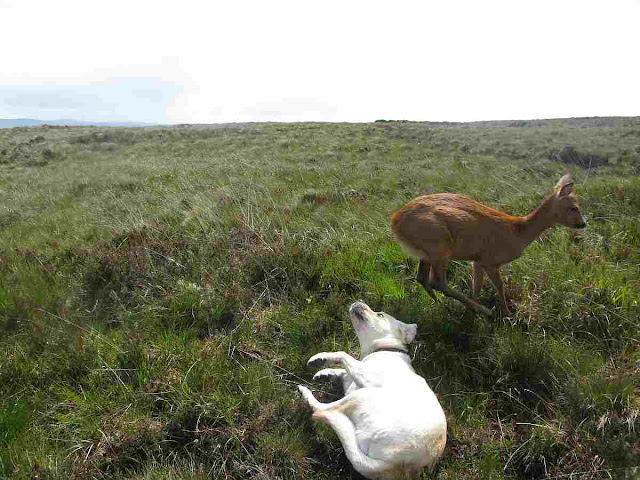 A few days ago I posted a couple of photos of a female Roe Deer which came very close to me (and my Labrador, Merlin) because she was trying to move us away from her young fawns. The next day, we had another encounter in which she charged my dog butting him in his flank with her head. I didn't manage to photograph the actual moment of impact which took place barely three feet from me, but did get one of the aftermath about a second or two later, as can be seen. As soon as Merlin was on his feet, he clearly wanted to play! The Roe didn't, however, and moved away, and so did we to leave her to get back to her fawns.
I've been reluctant to post this photo, though strongly encouraged to by those who have seen it. My problem is that I don't want to hurt my dog's feelings, because it was very much a case of: Roe Deer 1, Merlin 0. And furthermore, everyone who has seen it has burst out laughing! So, finally, I've agreed to post it, but I do so only on condition that when you look at it you don't laugh. After all, you wouldn't want to further embarrass a young dog, would you? OK? Promise?
Thanks, Malcolm (and Merlin)
Posted by Islay Natural History Trust at 14:31