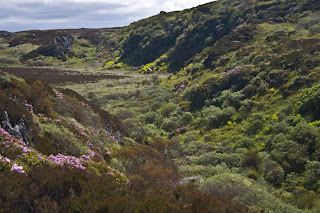 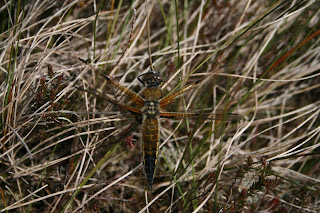 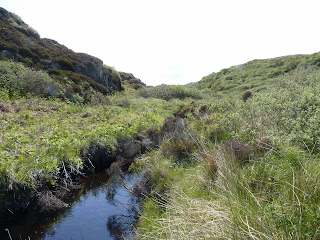 Well, I have discovered a new part of Islay and have the ticks, scratches and bruises to prove it! I parked at Rockside Farm and headed for Gleann Osamail which in fact is beautiful, just very overgrown and almost impenetrable. Lots of Willow and Rowan and sadly Rhododendron, probably other species too. I was looking for Oak for the Purple Hairstreak, but didn't see any. This was a not altogether pleasant walk on account of the bog and very uneven ground. I had to double back on myself several times but did make it to the end of the glen eventually at which point I sighed heavily and returned the way I'd come.

Its remote location and bogginess did mean it was good for wildlife, however, and here are the highlights of my day, the meadows were just amazing and the music of birdsong accompanied me all the way.
adder (one female)
Small Heath (more than 40)
Marsh Fritillary (at last, but only one)
beautiful meadows
Poplar Hawk Moth (one)
Bumble Bees (lots) Bombus pascourum
Grasshopper Warbler
Willow Warbler
Whitethroat
Sedge Warbler
Reed Bunting
Buzzard
Raven
Cuckoo (all the time, including 'enigma' variations on what is after all a rather boring song)
Four-spotted Chaser
Golden-ringed Dragonfly (hurray for the bog!)
Large Red Damselfly

My most unusual sighting, however, was a herd of about 8 pigs. I'd been wondering what had been turning the soil when I suddenly happened upon the pigs. I don't know what species or provenance but I'd be interested to find out. Also, a wee wooden shelter on the west side of the glen. I wonder what or who used to inhabit that?
Becky
Posted by Islay Natural History Trust at 08:57