Whether suddenly afflicted by guilt at having forgotten to buy anything for Mothers' Day, or just overcome by a burning desire to accompany his mum on a walk, a miracle occured yesterday - James and I went for a walk together! Not enticed by my tame suggestion of a walk at Kilchoman, James joined me in a perusal of the map and we finally decided to ascend Glas-bheinn and then (gulp! - James' suggestion) simply march across five more one kilometre squares on the OS map. "It's quite difficult terrain, James," I tried to dissuade him, but, no, if he was in for a penny, he was in for a pound! So, not wanting to appear unenthusiastic (or old!), I agreed - and so we set off.

In the event we (thankfully) curtailed our walk and ended up just ascending Glas-bheinn - but, what views! A pair of Golden Eagles flew over our heads; we saw Merlin, Goldeneye (on Loch Allallaidh), Meadow Pipit, Skylark, Lapwing and Raven. Here I include some of my favourite sightings of the day though - Frog Spawn very near the summit of the mountain (there was none on the way up along Kilennan River), Cladonia Floerkaena (my favourite lichen) and a Dor Beetle. 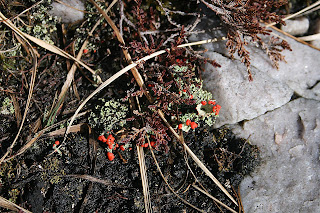 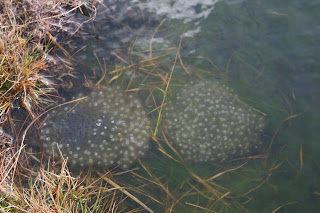 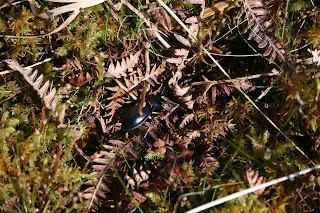 James rated it 7 out of 10 for enjoyment value, but when I asked where our next walk would be, he replied, "It was a one off, mum - for Mothers' Day." Even so, it was one of the best Mothers' Day presents I've received. Thanks James.