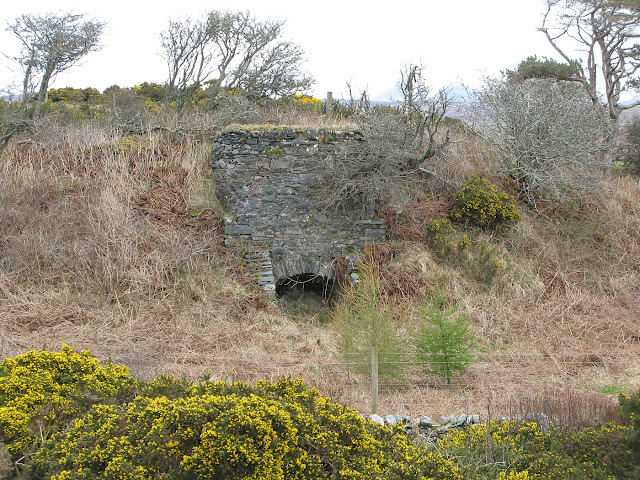 Several of these can be found on Islay. This is a well-preserved example on the Rinns. There is no limestone anywhere close by, the nearest is north of Bridgend, but it was presumably just as easy to bring the stone to the kiln as it was to create the quicklime somewhere else and cart that. With much of Islay having acid soils, the additional fertility provided by the lime was very important for the farmers, as it still is, but nowadays they use crushed stone from the Ballygrant quarry.
The invaluable Wikipedia says:
"The common feature of early kilns was an egg-cup shaped burning chamber, with an air inlet at the base (the "eye"), constructed of brick. Limestone was crushed (often by hand) to fairly uniform 20–60 mm (1–2.5 inch) lumps - fine stone was rejected. Successive dome-shaped layers of coal and limestone were built up in the kiln on grate bars across the eye. When loading was complete, the kiln was kindled at the bottom, and the fire gradually spread upwards through the charge. When burnt through, the lime was cooled and raked out through the base. Fine coal ash dropped out and was rejected with the "riddlings".
Only lump stone could be used, because the charge needed to "breathe" during firing. This also limited the size of kilns and explains why kilns were all much the same size. Above a certain diameter, the half-burned charge would be likely to collapse under its own weight, extinguishing the fire. So kilns always made 25–30 tonnes of lime in a batch. Typically the kiln took a day to load, three days to fire, two days to cool and a day to unload, so a one-week turnaround was normal. The degree of burning was controlled by trial and error from batch to batch by varying the amount of fuel used. Because there were large temperature differences between the centre of the charge and the material close to the wall, a mixture of under-burned (i.e. high loss on ignition), well-burned and dead-burned lime was normally produced. Typical fuel efficiency was low, with 0.5 tonnes or more of coal being used per tonne of finished lime (15 MJ/kg)."
Malcolm
Posted by Islay Natural History Trust at 14:30