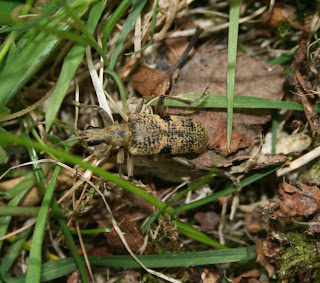 On the Baptist Church walk to Kintour chapel I found this beetle and have identified it as, wait for it,

Rhagium mordax - for once the scientific name might be less of a mouthful than its long-winded English name of Blackspotted Pliers Support Beetle. As we saw it amongst wood bark it might just have emerged? It's a member of the Longhorn beetle family.

This is a yellow beetle with brown and black mottling and two eye-like spots on its wing-cases. For a 'long-horn' beetle, it has relatively short antennae.


Adults are seen between May and July on open-structured flowers, particularly hawthorn and umbellifers, and the larvae are found in the very rotten wood of most species of broad-leaved trees, especially just under the bark. This beetle is common in woods and hedgerows in most parts of Britain and is most often seen in garden orchards or hedgerows in country areas.

Wood-feeder as larvae, on very soft decaying, long-dead wood of fallen trees or stumps where they form tunnels, usually just below the bark. Adults feed on nectar and pollen of flowers.