This bird was feeding in a field just south of Bowmore yesterday - the poles and red-and-white tape are meant to scare the geese off the field and stop them feeding there!The goose lacks a lot, but not all, of its black pigment, melanin, and is therefore called 'leucistic' as opposed to 'albino' in which there would be no black at all, even on the bill and legs. Barnacle Geese lacking some black pigment have turned up before on Islay, but I've never seen one which was as white as this one. Such plumage variations are usually carried on a recessive gene and it requires both parents to carry it in order that one or more of the young also show the variation. Obviously in a population of 60,000-70,000, the chances of a male and a female, each with the same gene, pairing and breeding are quite small, hence its rarity. The fact that such a conspicuous bird has not been seen earlier this winter suggests it is a fairly recent arrival, perhaps having come from Ireland as we know that some geese do move here before the proper migration to Iceland next month.
The photograph is as good as I could manage on a cloudy day and at some distance. Someone may get a better one if it stays around.
Malcolm 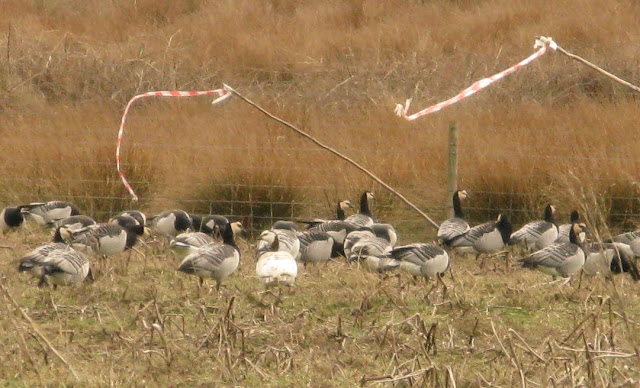