Over on Jura a week ago to check on the very small (13 birds) Greenland White-fronted Goose flock north of Craighhouse, we found pairs of large Canada Geese in several places, including in the same field as the Whitefronts. Also present there were two pairs of Greylags. The latter have been steadily colonising Jura in recent years just as they have Islay. Canada Geese (introduced to Britain from North America in the 17th century and now widespread and numerous - over 200,000) have been breeding along the coast of mainland Argyll for several years (and on Colonsay), so perhaps it was only a matter of time before they crossed over to Jura. It was though a surprise to find them scattered from Ardfin to Knockrome as if there had been a small influx perhaps in the earlier hard weather. If they stay and breed, which seems very likely, it will only be a matter of time before they do the same on Islay and the farmers here will have to cope with a second resident goose which instead of migrating away in April stays to feed on the crops throughout the summer! 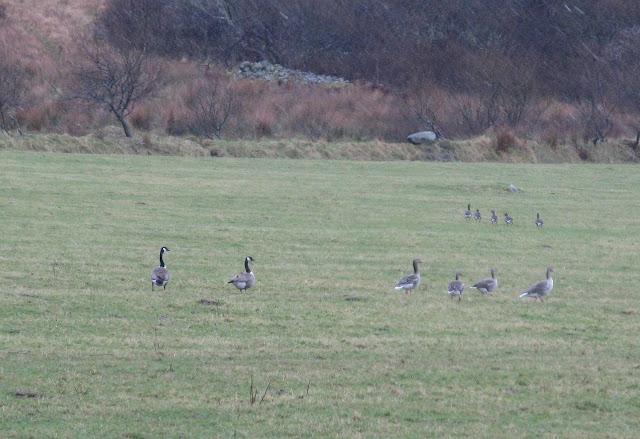 The photograph shows the Canadas and the Greylags in the foreground, while the five birds behind them are Greenland Whitefronts. The photograph isn't, I acknowledge, of top quality, but you should note the numerous small diagonal white streaks - it was snowing quite hard at the time!
Malcolm
Posted by Islay Natural History Trust at 08:14