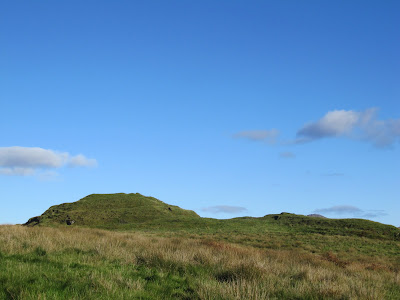 Took a walk up to Dun Nosebridge this afternoon.  The (probably) Iron Age hill fort is situated 1km ESE of Neriby farmhouse and is accessed quite easily from a gate near the bridge at Mulindry.  It is on a ridge, around 15m high, overlooking the upper reaches of the River Laggan 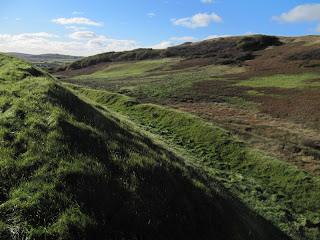 The fort has three impressive tiered ramparts enclosing two major ditches which together 'defend' the summit which is an area of around 25m by 15m.   On the SE-facing slope of the ridge which extends to the NE of the fort there are the turf-covered founations of several buildings of late 18th- or 19th-century date (clearances in Nosebridge and other townships in 'The Glen' took place between 1848 and 1853, when the sequestrated Islay estate was being administered by a receiver, James Brown of Edinburgh [Storrie 1981]. Traces of fairly extensive rig-cultivation are also visible on the sloping ground immediately to the SW of the main ditch-system. 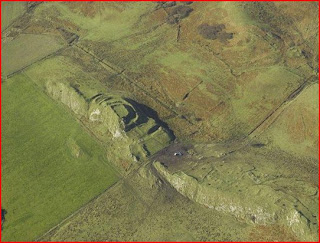 There has never, to my knowledge, been an excavation at Nosebridge, and the site has therefore never been accurately dated.  It is assumed to be 'iron age' in origin, which would put it, on Islay, at somewhere between 1,000BC and 1,000AD.  The site is likely to have also been occupied both before and after those dates, but to have operated in forms that approximate to the hill-fort type sometime between those dates. 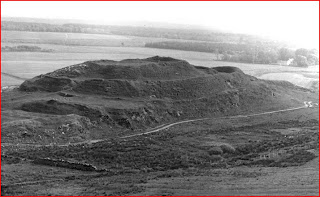 There are around 80 'duns', what may be loosely described as fortified hills or forts,  on Islay, of which Dun Nosebridge is certainly one of the most impressive.  The truth is however that very little is known about these structures, either who built them or why they were built.  It seems likely, but my no means certain that they were defensive structures, but it is not really understood who or what they were defending against.  The landscape may have been parceled up between warring families/groups who were enough of a threat to one another to justify the construction of these elaborate and massive structures, or there may have been a threat, perceived or real, from some external source.   The best known external source were the vikings of course, but these structures almost certainly pre-date the vikings by a very long time, although they could latterly have been used as defensive structures against them.  The name Nosebridge is thought to have a Norse origin.
There are alternative views as to their purpose - they could have been iron age stately homes, status symbols to demonstrate wealth and power, but there is little hard evidence to back this up.
Nosebridge is a spectacular site, easy to get to (please avoid lambing time if you have a dog) and well worth the visit.  Access is via an easy track through some attractive woodland, mostly sessile oak and hazel.  While we were there this afternoon a small child was being shown how to hunt for hazel nuts by her grandmother, which was rather excellent.  They were just about to climb up through the wood to see if the particularly good nut trees that the lady could remember from her childhood were still there.  The girl showed me some she had collected.. 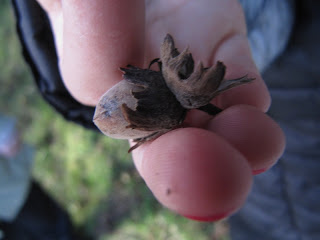 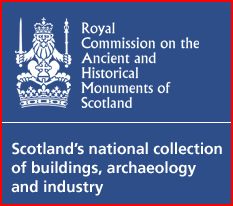