Yesterday the Common Marbled Carpet Moth (Chloroclysta truncata)eggs hatched. These were laid on 30th August so have taken less than two weeks to hatch. There are about 7 of the tiniest caterpillars imaginable now feeding on dock and bramble in the Centre. We will release them when we close as they overwinter as larvae and emerge as moths next spring. This moth is a Geometrid moth which means the larvae generally have only two pairs of prolegs (at the hind end) rather than the usual five pairs in most lepidoptera; the lack of prolegs in the middle of the body necessitates the peculiar method of locomotion, drawing the hind end up to the thoracic legs to form a loop, and then extending the body forward. This makes it look as if they are measuring the earth as they move. The name GEOMETRIDAE is from the Greek "geo" (the earth) + "metron" (measure). Becky 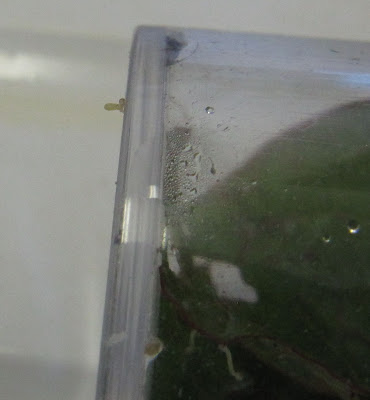