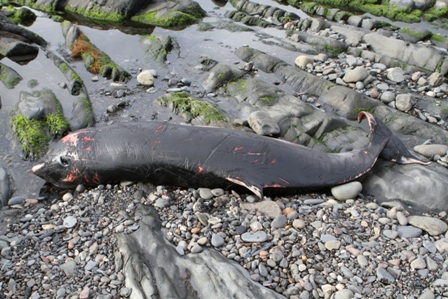 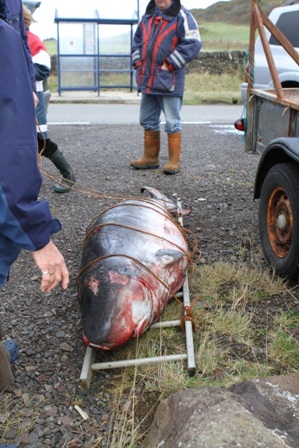 A pygmy sperm whale, a very rarely sighted cetacean in UK waters, has stranded near Ellenabeich on the Isle of Seil, south of Oban, prompting scientists from the Scottish Agricultural College (SAC) to investigate. Pygmy sperm whales are rarely sighted and identified alive at sea, and therefore studying the carcass allows scientists to find out more about this elusive species. Since the Natural History Museum started keeping records of stranded cetaceans in 1913, only ten pygmy sperm whales are known to have stranded in the UK previously; three of which were in Scotland, the first reported in 1999. The stranding was spotted on 6th October by Brien and Liz Dickey, who informed John Gordon, a deep-sea fish biologist who is an Honorary Research Fellow at the Scottish Association of Marine Sciences (SAMS) in Oban. He in turn contacted Nienke van Geel, a PhD student at SAMS studying cetaceans on the west coast, who next day made the positive identification and contacted SAC. “We were all astonished, that what at first was reported as a porpoise or dolphin, turned out to be such a rare specimen”. With help from staff from the local Seafari boat operator the whale was removed from the beach ready for collection by SAC. Easdale ferryman, Alan MacFadyen, added, “For my part it was a sad sight to see and thankfully rare. It looked beat up, with surface wounds but no major wounds. It attracted quite a crowd. Seems to have been a few whales spotted about the west coast lately.”

A necropsy, an animal autopsy, was conducted by Andrew Brownlow at SAC’s base in Inverness and preliminary results suggest that the whale, a sub-adult male, was in healthy condition; the blubber layer seemed to be of good thickness; there were hardly any parasites found in the stomach and lung, in fact the whale had been eating shortly before being beached as there was still an undigested squid in the stomach. Results from the necropsy indicated that the animal would have stranded alive. Nienke, who attended the necropsy, said, “It is unknown what caused the animal to strand. Although we are still waiting on histology results, all signs point to a healthy individual.”

Pygmy sperm whales share some common traits with their cousin, the sperm whales; they too have a spermaceti organ in their heads, allowing for echolocation and aiding deep dives to hunt. The main difference is the size; while sperm whales can reach lengths of 18 metres, pygmy sperm whales will reach a maximum of 3.5 metres. Olivia Harries, Biodiversity Officer at HWDT (The Hebridean Whale and Dolphin Trust), commented, “To put the size of the pygmy sperm whale in context; the individual that stranded on Seil weighed about 150kg, the heart of the fin whale that stranded in South Uist weighed about 130kg.”Pygmy sperm whales favour continental shelf and slope regions and deep water so it’s rare to find this species in inshore waters. Their range stretches as far south as New Zealand, whilst Scottish waters represent the most northerly limit of its distribution.

SAC coordinates the Scottish Marine Animal Stranding Scheme with support from DEFRA and Marine Scotland. If you find a stranded animal that has perished please contact SAC on 01463 243030. Moreover, if you find a stranded animal that’s still alive, please contact the British Divers Marine Life Rescue (BDMRL) on 01825 765546. BDMLR are fully equipped to attempt re-float stranded animals, please note that you should never approach a stranded animal without proper training. Sandra Koetter, HWDT’s Sightings Officer, adds, “While it’s sad to find marine mammals on the shore, either alive or dead, by reporting the find you can help to discover more about the species and also what might have caused its death.” This report follows a spate of recent unusual strandings and sightings; a sighting of a live sperm whale in the Sound of Raasay, the fin whale that washed ashore on South Uist and more recently a live sperm whale in Kirkwall Bay (Orkney) and a dwarf sperm whale off Penzance, which might be the first live record of this species in UK waters. If you spot a cetacean, in its natural environment at sea, please report it to HWDT online at