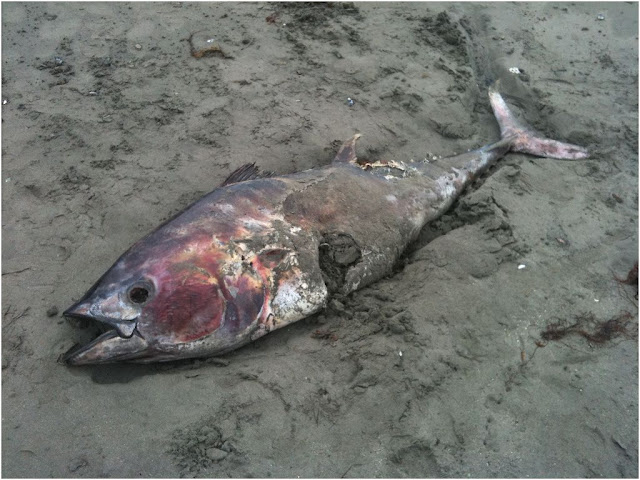 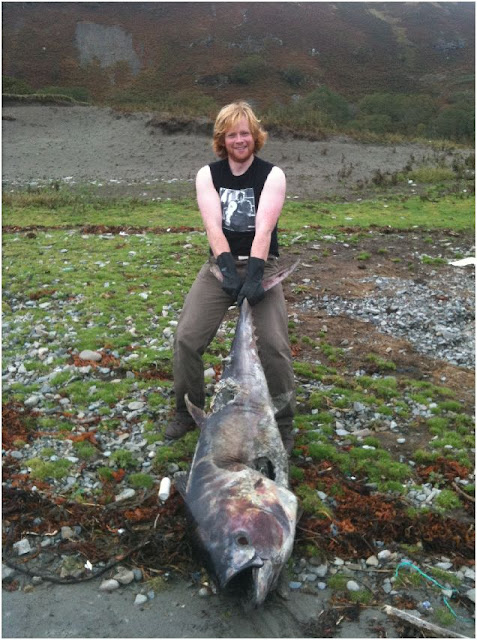 A report of a rare sighting prompted an investigation after a tuna was spotted on the shore of Laggan Sands, Isle of Mull. The Hebridean Whale and Dolphin Trust (HWDT) were notified of by the unusual find and set off for Lochbuie. Morven Summers, Volunteer Coordinator at HWDT, said, “We were a wee bit dubious at first and thought that the reporter may have mistaken a porpoise, however when we arrived at Laggan Sands we were shocked to see the huge fish on the shore.” It’s believed that the fish is a bluefin tuna; a large, torpedo-shaped fish that can travel at speeds of up to 43 miles per hour and weighs, on average, 550 lbs, although much larger specimens are not uncommon. The Mull tuna measured 1.8 metres long. Brain Swinbanks, Chairman of the Tobermory Harbour Association, added, “Seeing the fish up close was fantastic, I would guess that the ’mull tuna’ weighed about 150 lbs.”

Atlantic bluefin tuna spawn in the Mediterranean Sea, however they are highly migratory and tagged individuals have been tracked swimming from North American to European waters several times a year.

Although not many consider the waters off the west coast of Scotland to play host to such a fish, historically tuna did frequent these waters. Dr. Clive Fox, from the Scottish Association of Marine Science in Oban, explains, “Bluefin tuna are rare in our waters but not unprecedented, indeed there used to be a commercial and sport fishery for them before the war.” In fact, evidence of bluefin tuna making an annual migration to UK waters goes back a few hundred years. Brain Swinbanks, Chairman of the Tobermory Harbour Association, added, “ The British rod and line record for Blue Fin Tuna is 851lbs caught in the North Sea in 1933 by Mr Mitchell-Henry fishing from a ship’s rowing boat 50 miles off shore and alongside the Herring Fleet. A decline in the stocks of herring resulted in a decline in migratory Tuna which originally came from the Mediterranean migrating all round the west coast of Scotland.” In September 1989, a 400lbs tuna was reported caught close to the Isle of Lewis.

Unfortunately the tuna carcass was too decomposed for full analysis, however the fish’s otoliths (ear bones) will be recovered and from these the age of the fish can be determined. If you find a stranded animal, HWDT would be very interested to learn about it. If researchers reach the carcass in good time then we can learn many things about the animal and why it may have perished. Please contact HWDT on 01688 302620 or email sightings@hwdt.org if you find anything on the shore.
Posted by Islay Natural History Trust at 13:03