Coming back from Portnahaven this evening after a game of badminton was an action packed journey on the wildlife front.  First out of the hedgerows were a couple of Brown rats who will have been having a hard time today because it has been raining heavily.  This seems to mean more rats out in the open - presumably because their burrows become flooded.
Hot on the heels of the rats were a group of Red deer hinds with at least one well-grown calf who were in their usual place just south of An Gleann.  Quite what it is that attracts them to the road is not clear - but they seem to like trotting about on the tarmac and then elegantly vaulting the hedge when they feel it is necessary.  They are very tolerant of cars.
The heavy rain meant that there were good numbers of frogs crossing the road as well - mostly immature individuals.  Presumably they simply get lost while wandering through the grass and suddenly find themselves on this large sterile black thing.  Once on it, I guess it is simply a lottery as to whether they are able to get off it again before getting squashed.  One tries to avoid as many as one can, but cars are brutal things if you are a frog. 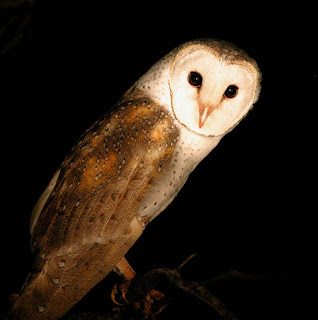 We saw a momentary Barn owl too, again close to An Gleann, which is usually the busiest location.  It was sitting on a fence post, but did not stay, as they sometimes do, instead flying off across the field and quickly out of sight as we drew closer.  A Hedgehog competed the party.
Carl
Posted by Islay Natural History Trust at 23:35