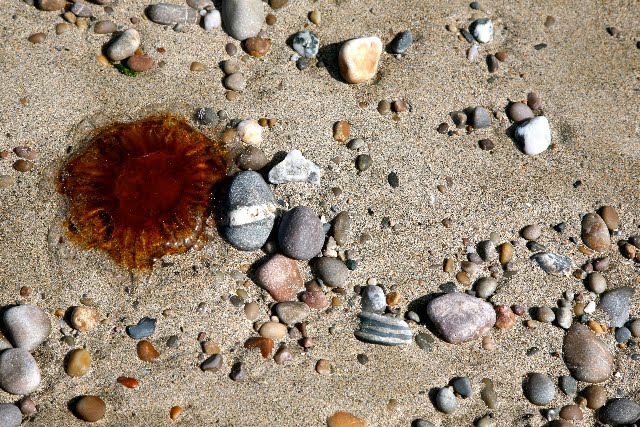 
Cyanea capillata is the largest known species of jellyfish. Its range is confined to cold, boreal waters of the Arctic, northern Atlantic, and northern Pacific Oceans, seldom found farther south than 42°N latitude.  The largest recorded specimen found, washed up on the shore of Massachusetts Bay in 1870, had a bell (body) with a diameter of 2.3 m (7 feet 6 inches) and tentacles 36.5 m (120 feet) long

If you come in contact with the tentacles you will receive a mild(ish) sting, in my experience (I have been stung a lot), this is a bit like a bad nettle but nothing like as uncomfortable as a wasp.  It produces a sort of red rash.  Creel fishermen can be stung in the eye as the tentacles whip round their haulers.  This is most unpleasant, but does not result in lasting damage.

Although capable of attaining a bell diameter of 2.5 m (8 feet), these jellyfish can greatly vary in size, those found in lower latitudes are much smaller than their far northern counterparts with bells about 50 cm (20 inches) in diameter. The tentacles of larger specimens may trail as long as 30 m (90 feet) or more. These extremely sticky tentacles are grouped into eight clusters, each cluster containing over 100 tentacles[5], arranged in a series of rows.

At 120 feet in length, the largest known specimen was longer than a Blue Whale and is generally considered the longest known animal in the world

The bell is divided into eight lobes, giving it the appearance of an eight-pointed star. An ostentatiously tangled arrangement of colorful arms emanates from the centre of the bell, much shorter than the silvery, thin tentacles which emanate from the bell's subumbrella.

Size also dictates coloration—larger specimens are a vivid crimson to dark purple while smaller specimens grade to a lighter orange or tan. These jellyfish are understandably named for their showy, trailing tentacles reminiscent of a lion's mane.

A coldwater species, this jellyfish cannot cope with warmer waters. The jellyfish are pelagic for most of their lives but tend to settle in shallow, sheltered bays towards the end of their one-year lifespan. In the open ocean, lion's mane jellyfish act as floating oases for certain species, such as shrimp, medusafish, butterfish, harvestfish, and juvenile prowfish, providing both a reliable source of food and protection from predators.
Predators of the lion's mane jellyfish include seabirds, larger fish, other jellyfish species, and sea turtles. The jellyfish themselves feed mostly on zooplankton, small fish, ctenophores, and moon jellies.

Lion's mane jellyfish remain mostly very near the surface at no more than 20 m depth, their slow pulsations weakly driving them forwards; they depend on ocean currents whereby the jellies travel great distances. The jellyfish are most often spotted during the late summer and autumn, when they have grown to a large size and the currents begin to sweep them closer to shore.
Like other jellyfish, Lions manes are capable of both sexual reproduction in the medusa stage and asexual reproduction in the polyp stage. Lion's mane jellyfish have four different stages in their year long life span, a larval stage, a polyp stage, an ephyrae stage and the medusa stage. The female jellyfish carries its fertilized eggs in its tentacle where the eggs grow into larva. When the larva are old enough, the female deposits them on a hard surface where the larva soon grow into polyps. The polyps begin to reproduce asexually, creating stacks of small creatures called ephyraes.The individual ephyraes break off the stacks, where they eventually grow into the medusa stage and become full grown jellyfish.

Carl (with a great deal of help from Wikipedia)
Posted by Islay Natural History Trust at 11:22