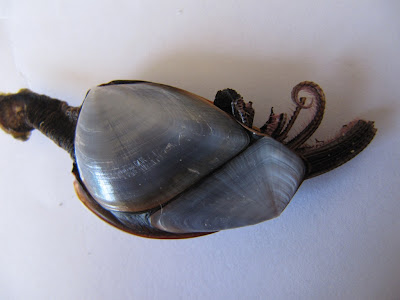 George found this Goose barnacle (Pedunculata) on the shore in front of his house.

Goose barnacles are filter-feeding crustaceans that live attached to hard surfaces of rocks and flotsam in the ocean intertidal zone.  Most species depend on water motion rather than the movement of their cirri for feeding, and so are found on quite exposed coasts.

I was once treated to a large plateful for dinner while in Portugal where they are called 'percebes'. They are very expensive, difficult to harvest, tasty, but insubstantial!
According to Wikipedia,  the Welsh monk, Giraldus Cambrensis, claimed to have seen goose barnacles in the process of turning into barnacle geese in the twelfth century.  These guys had too much time on their hands...